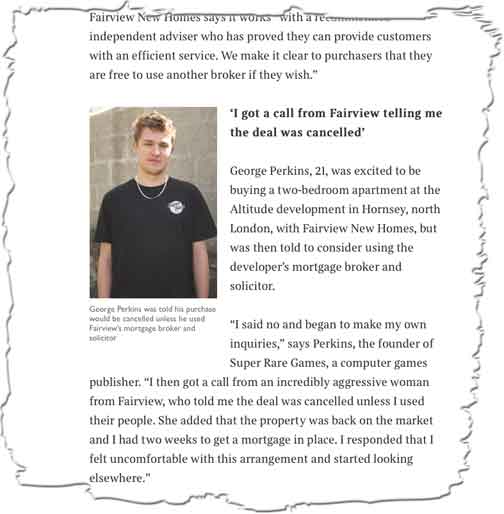 The Times reports the case of a Fairview New Homes buyer losing a sale because he wanted to use his own solicitor and mortgage broker.

George Perkins, 21, was excited to be buying a two-bedroom apartment at the Altitude development in Hornsey, north London, with Fairview New Homes, but was then told to consider using the developer’s mortgage broker and solicitor.

“I said no and began to make my own inquiries,” says Perkins, the founder of Super Rare Games, a computer games publisher.

“I then got a call from an incredibly aggressive woman from Fairview, who told me the deal was cancelled unless I used their people.

“She added that the property was back on the market and I had two weeks to get a mortgage in place. I responded that I felt uncomfortable with this arrangement and started looking elsewhere.”

Developers are putting pressure on buyers to use their preferred solicitors or mortgage brokers, or risk missing out on the new-build home they wanted to buy. Buyers say that they have been warned that they would lose incentives they were promised, such as money towards legal fees or for furn

Fairview New Homes told The Times that it works “with a recommended independent adviser who has proved they can provide customers with an efficient service. We make it clear to purchasers that they are free to use another broker if they wish.”

The case highlights the dubious collusion between developers and their favoured commercial practitioners.

“Any solicitor unwise enough to have made a fuss about these toxic leases would almost certainly have been removed from the panel,” he says.

“A recommended solicitor, whether from developer or estate agent, is one to avoid.

“Throughout the ground-rent scandal the recommended conveyancing solicitors have proved to be little more than the developers’ stooge.”

Let’s hope this unjustifiable relationship between developers and supposedly independent advisers ends after the Competition and Markets Authority concludes its mis-selling inquiry into leasehold houses and predatory lease terms.

Fairview New Homes, a private developer, is based in Enfield and here its most recent annual report:

NLC conveyancing report on BBC R4 You and Yours today

The Sun / The Times urge caution over leasehold purchases, while The Times / Guardian / Mail report Barratt paying out £2m at Citiscape

Now it is Shanly Homes dumping its customers into unsellable homes

What to do about the Grenfell cladding scandal, asks Oxford conference
Next Post: Moskovitz forfeits £400k Camden flat from 24-year-old woman ‘whose brother did not forward correspondence for two years’