Donate
You are here: Home / Latest News / ‘Fleecehold’ petition launched to stop housebuilders creating YET ANOTHER revenue stream from their customers 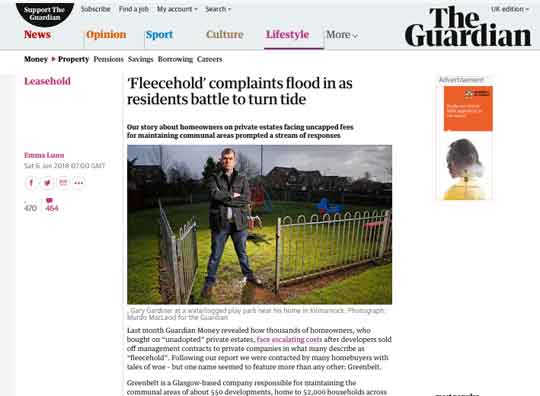 This is where house builders have created management companies for assets such as roads, lighting and drainage on new estates.

Local authorities are delighted to be spared the expense, and the nation’s plc housebuilders have seen the angles of creating another complex, long-term asset at the expense of their customers.

And their customers have often bought their properties with taxpayers’ aid through the Help To Buy scheme.

The public is getting thoroughly fed up with this sort of rip-off – and the fecklessness of government in doing anything about it.

The petition can be signed here:

Local authorities are avoiding increasing their grounds maintenance responsibilities on new private estates by requiring developers to form management companies to deal with the maintenance long term. These management fees are an extra tax on hard working families. Councils should adopt the land.

For most home owners, it is simply inconceivable that local authorities don’t pay for these basic amenities. These are the sort of services that are paid for with council tax.

In December, the Guardian has reported this – yet again showing its engagement with these unsexy housing issues.

Homeowners trapped by ‘fleecehold’ – the new cash cow for developers

Thousands of homeowners on private estates are facing unregulated and uncapped maintenance fees, amid allegations that developers have created a cash cow from charging for communal areas not maintained by the council. Management contracts for “unadopted” private estates are frequently sold off to speculators and property management companies in the same way as freeholds and ground rents – leaving homeowners with spiralling fees and nowhere to turn.

“Management contracts for “unadopted” private estates are frequently sold off to speculators and property management companies in the same way as freeholds and ground rents – leaving homeowners with spiralling fees and nowhere to turn,” says the newspaper.

The Guardian cited the example of Lynn Myers, who bought her two-bed leasehold house in Penrith, Cumbria, from developers Persimmon in September 2016. The sales agent told her the estate would be managed by Carleton Meadows Management Company with an estate charge of £100 a year per household for grass cutting.

Gateway Property Management Limited appears to have one director:

Residents in Church Meadows in Great Broughton are in a similar situation. Richard Elsworth moved into his Persimmon-built freehold property in May 2013. The estate’s 58 residents each pay Gateway a service charge of £125.53 a year, amounting to £7,281 to maintain about 600 square metres of grass.

When Elsworth’s neighbours sold their home, they were charged £360 for a “management pack” for the buyer, plus £144 for a deed of covenant.

In January, the newspaper revised the subject citing Greenbelt group Limited, a Glasgow-based company responsible for maintaining the communal areas of about 550 developments, home to 52,000 households across Scotland and the north of England, with another 30,000 due to join the company shortly.

The directors are given as:

Allegations against Greenbelt consist of overcharging and under-delivering. The firm vigorously denies the allegations.

‘Fleecehold’ complaints flood in as residents battle to turn tide

Last month Guardian Money revealed how thousands of homeowners, who bought on “unadopted” private estates, face escalating costs after developers sold off management contracts to private companies in what many describe as “fleecehold”. Following our report we were contacted by many homebuyers with tales of woe – but one name seemed to feature more than any other: Greenbelt.

The Guardian wrote: “We have been contacted by English homeowners with gripes about Greenbelt on estates in Leeds, Bradford, Middlesbrough and Bedale; and, in Scotland, estates in Kilmarnock, Kirkcaldy, Edinburgh and Menstrie.

“The complaints follow a broadly similar pattern. When they bought their homes, most were aware they would have to chip in for maintenance of the estate’s communal areas by way of “burdens” – additional responsibilities and/or obligations written into their title deeds.

“However, some householders say that costs escalated and service levels fell, with some questioning the legality of their agreements.”

A Facebook group titled “Unhappy Owners Against Greenbelt Group” has more than 700 members, while reviews site Trustpilot plays host to more than 100 Greenbelt reviews, with the company awarded just one star – the lowest possible rating.

We are being ripped off by private estate charges by developers and property predators just like leaseholders, says HORnet