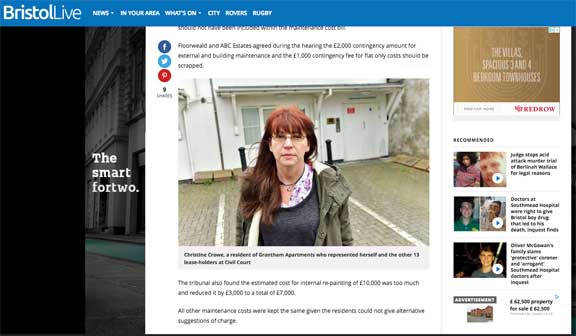 Leaseholders claimed their management fees had also gone up from £50 to £178 a month, according to the website.

The tribunal also disallowed £4,100 demanded to insure the building.

The 14 leaseholders were represented by Christine Crowe.

“Before the hearing we showed the tribunal members around the apartments so they got to see for themselves what did and did not need doing, and the fact they knocked £27k off the figure shows it was too much,” she told the website.

The case was the second property tribunal hearing, after one in May 2017 which found that the leaseholders were overcharged in service charges.

People living in a Kingswood apartment block have taken the building’s owners and managers to court over “skyrocketing” and “extortionate” management fees. Residents of Grantham Apartments in Two Mile Hill claim the amount they pay per month to management company ABC Estates for general works and repairs has more than doubled in the past few years.

Companies like ARMA member SDL Bigwood are ripping off homeowners in private estates, Parliament is told

Sesame Apartments: Yet another anonymous Long Harbour freeholder demanding £2.2 million over Grenfell cladding
Next Post: The Sun / The Times urge caution over leasehold purchases, while The Times / Guardian / Mail report Barratt paying out £2m at Citiscape