Donate
You are here: Home / News / Parliament / APPG April 26 2018 / Galliard Homes ‘needs to take responsibility for what it has built’ 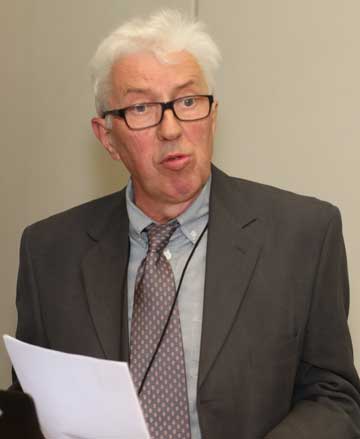 A very different scene was outlined to the All Party Parliamentary Group on April 26 by Nigel Pickford (left), a leaseholder at New Capital Quay, another site with Grenfell cladding of more than 900 flats built by Galliard Homes only four years ago.

The house builder also owns the freehold and the management of the site, where 1/3 of the flats are social housing and 2/3 private.

Mr Pickford explained that in August last year it was discovered that “our shiny new building had cladding similar to Grenfell”.

“Since then the 2,000 residents have been living in a dark limbo land of fear and confusion”, with fire marshals employed 24/7 at a cost of £1.25 million a year.

“All this has had a devastating influence on the sale of flats. A friend who wants to sell has had her flat valued at one tenth of what she paid for it. She purchased with the Help To Buy scheme, which means that means that taxpayers’ money could go down the drain as well as many private owners facing bankruptcy.”

“And yet at the same time house builders are making record profits. How can that be right?

“But this isn’t just about money. This is the right to be safe in one’s own home. Those of us who live in these buildings can no longer sleep at night for worry that we would not be able to get out in time if the buildings went up in flames.

“What about the old, or disabled, or parents with small children who are particularly vulnerable? The image of the burned-out carcass Grenfell haunts us nightly.

“And what does Galliard Homes do: our builder, our developer, our freeholder?

“Well, I can tell you what they haven’t done. They have not carried out a survey by an expert fire engineer to establish what remedial works are required to make the building safe. A first measure strongly recommended.

“Or, if they have done such a survey they have not disclosed the results to the residents.

“They have not carried out a financial assessment of how much these works would cost. So making it possible for the flats to be more fairly valued. If they have costed the works they have not told us the answer.

“In fact, not a single director of the company has had the courtesy to directly address one word to the residents about the problems we face on a daily basis.

“Instead, they hide behind lawyers and PR people, who repeats the mantra ‘no comment’.

“Yet the slogan on Galliard Homes is “approachable”, “attentive”, “caring family company” and “with family values”.

“Communities Secretary [now Home Secretary] Sajid Javid rightly praised Barratt Homes for taking ownership of the Cityscape problem which it built 17 years ago. I call on him to increase pressure on Galliard Homes and other major house builders to also step up and take some responsibility for what they built.”

The BBCR4 You and Yours programme interviewed Mr Pickford after his speech and the item, including Galliard’s estimate that the cost of removing the cladding will be £7-10 million is here:

Taxpayers face £85,000 loss as Homes England accepts leaseholder can pay back loan on flat blighted by Grenfell cladding
Next Post: Praise for Barratt’s – and LKP – from Citiscape leaseholders