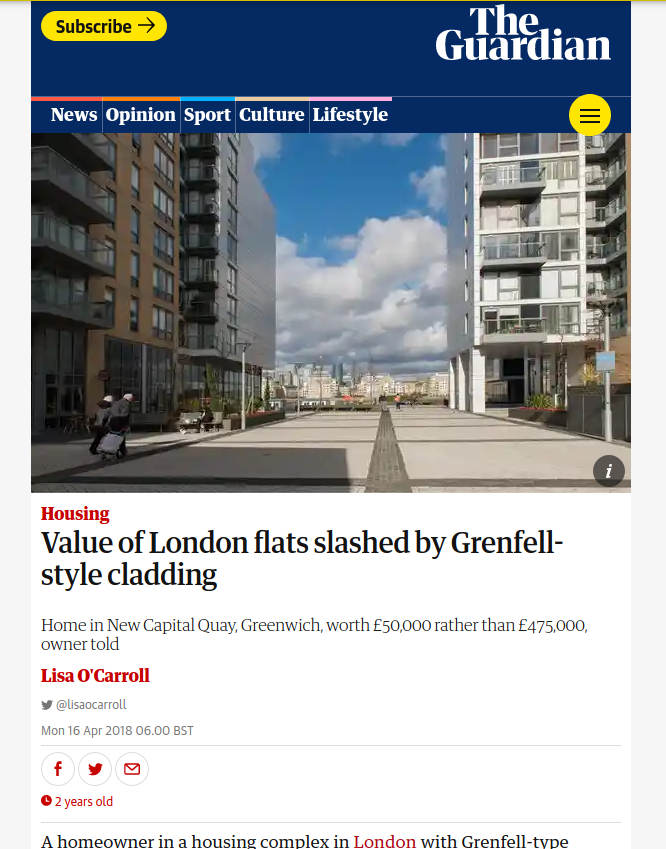 Taxpayers face a loss of £85,000 on a Help To Buy loan at New Capital Quay after Homes England accepted that a flat blighted by Grenfell cladding was now worth only £50,000.

But it has been valued for sale at only £50,000 owing to the Grenfell cladding, which has blighted just under 1,000 flats at New Capital Quay.

This valuation has been accepted by Homes England, which means Mrs Langevin will pay back only £10,000 of her loan.

The decision opens up the prospect of taxpayers losing millions over homes bought with Help To Buy blighted by either cladding or doubling ground rents.

“Homes England has now determined that you may proceed with the redemption of your help-to-buy equity loan based on the valuation provided … ie at a market value of £50,000,” it said in a letter to Mrs Langevin, reported today in the Guardian.

A charity that is campaigning for leasehold reform in the UK to liberate home owners from onerous contracts with freeholders said it was time the government took action forcing the removal of such cladding.

Martin Boyd, a trustee at Leasehold Knowledge Partnership, is quoted in the newspaper:

“The leaseholders in cladding flats have faced a huge amount of stress and worry over the last 10 months and have now seen their homes massively devalued.

“If the government is also going to suffer by having to write down these help-to-buy loans, it might finally encourage the sector to help develop a more workable solution. It’s not just the private and shared owners impacted by this problem.”

He said social housing landlords would also be experiencing significant devaluation on their properties, which could put them in breach of their loan covenants.

At New Capital Quay builder and freeholder Galliard Homes and warranty provider NHBC are fighting it out over who picks up the £20-40 million cladding removal bill, with leaseholders caught in the middle.

Both are hoping that government will be forced to act, after changing its mind over the safety of the cladding following the Grenfell disaster.

The government has agreed to virtually wipe out a help-to-buy loan on an apartment in a London block with cladding similar to that used at Grenfell Tower, it has emerged. It will make the write-down on the grounds that the value of the flat in Greenwich has been reduced from £500,000 to £50,000 because the developer has no current plans to remove the cladding.

England’s cladding leaseholders could end up with equity stripped out of their homes, warns Welsh minister

Will Law Commission bring in the ‘seismic changes’ that leasehold needs?
Next Post: Galliard Homes ‘needs to take responsibility for what it has built’