Donate
You are here: Home / News / Gary Streeter MP: Hand over the freeholds at Saltram Meadows, Persimmon, or else lose Help To Buy … 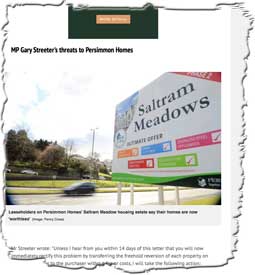 Tory MP for South West Devon Gary Streeter has told Persimmon to hand over the freeholds at to buyers at its site Saltram Meadows, or else lose the Help To Buy payola …

The threat is made on the Plymouth Live website this afternoon:

Persimmon Homes told to return freeholds within 14 DAYS – or else

A veteran MP has demanded Persimmon Homes return the freehold ownership of people’s properties – no strings attached within 14 days – or face serious consequences. Gary Streeter has raced to the aid of leaseholders across the Plymouth area who feel they were misled when signing up to life on the developer’s new-build estates.

Mr Streeter has vowed to shame the developer in Parliament and call for the massive subsidy of Help To Buy to be removed from Persimmon.

It is thanks to Help To Buy that Persimmon chief executive received a £45 million bonus in the company’s ludicrous and highly controversial remuneration scheme. This also saw the sacking over his even more absurdly remunerated predecessor Jeff Fairburn (who was in for £110 million, but stopped the taking at £75 million).

Mr Streeter is seeking to repeat the action at Saltram Meadows that was taken by Persimmon when it settled a Trading Standards case in Cardiff in August, handing over freeholds to leasehold house owners and paying back the ground rent.

The dump landed on LKP as well. It was a sobering experience to have 700 emails on a Monday morning. But the data showed how the leasehold houses scandal, mainly thanks to Persimmon, is spread across the country, from Cornwall to Northumberland.

Homebuyer calls for Persimmon boycott, and local MP Andrew Selous agrees with him!

The new leaseholders’ hero … Lloyd George
Next Post: NLC conveyancing report on BBC R4 You and Yours today