Donate
You are here: Home / Latest News / Guardian reports misery of leasehold home owners trapped by John Lewis Partnership Pension Trust – and the Mail, Sun, Mirror and Lad Bible (any we have missed?) 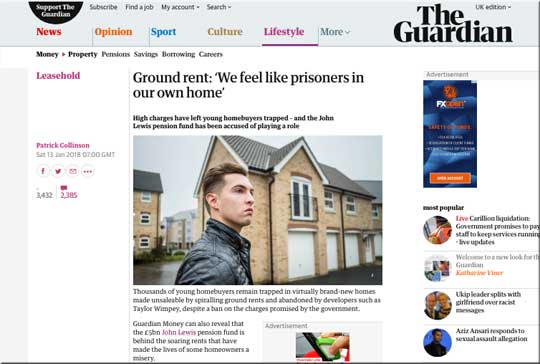 UPDATE: for reasons that are a mystery to LKP, this story has now become widespread: Mail, Mirror, Sun (below). All are copies of the Guardian article, which may itself be from the Cambridge Evening News. It may be a case of the age of national newspaper website journalists which explains why this one took off and hundreds of others didn’t.

Personal finance journalist Patrick Collinson, of the Guardian, has again waded into the ground rent scandal highlighting the role of the John Lewis Partnership Pension Trust.

It has been hoovering up properties with doubling ground rents, usually through a vehicle called Fairhatch GR Limited.

LKP met the trustees of the John Lewis Partnership Pension Trust with our patron MPs Jim Fitzpatrick and Sir Peter Bottomley in the summer.

Astonishingly, the John Lewis Partnership Pension Trust entrusted the management of its freeholds to Vincent Tchenguiz’s interests, ultimately controlled by the Tchenguiz Family Trust in the British Virgin Islands.

Our concerns were fully understood by the trustees of the John Lewis Partnership Pension Trust.

In common with other speculators in residential freeholds, the John Lewis Partnership Pension Trust does not believe itself responsible to sort out highly remunerative ground rent terms that have rendered the homes of ordinary people completely unsellable.

Taylor Wimpy, the house builder primarily responsible for spreading doubling ground rent terms, has set aside £130 million to vary the leases to rise with inflation (RPI).

But it only applies to those who bought directly from it and not for resales.

Furthermore, the scheme only applies to those cheated former customers who contact the housebuilder. It refuses to reveal the scale of the scandal or explain which sites are affected.

The John Lewis Partnership Pension Trust is reported in the Guardian saying:

“We are aware of concerns about the terms of some of the leases … For leases that are not covered by the Taylor Wimpey scheme, the trustee is not currently able to agree to a variation of the leases.

“However, the trustee is exploring whether it may possible to vary these leases in the future. These discussions are ongoing and are commercially confidential.”

How much longer is the John Lewis Partnership Pension Trust going to keep on playing this game?

It was fully aware of all these issues more than six months ago.

As for commercial confidentiality, what would that be?

Isn’t it more the case of hiding the blushes of the trustees of the John Lewis Partnership Pension Trust for getting involved in this racket?

It seems as though what is really needed is a selection of new trustees.

The link to the Guardian is here:

Ground rent: ‘We feel like prisoners in our own home’

High charges have left young homebuyers trapped – and the John Lewis pension fund has been accused of playing a role Thousands of young homebuyers remain trapped in virtually brand-new homes made unsaleable by spiralling ground rents and abandoned by developers such as Taylor Wimpey, despite a ban on the charges promised by the government.

A young couple are stuck unable to sell their home after they discovered a legal catch that means their ground rent doubles every decade. Newlyweds Nathan and Tasha Stewart bought their first house in Soham, Cambridgeshire in 2014. It was only they tried to sell their leasehold property, built by housing firm Taylor Wimpey , they found out about the punitive clause.

A YOUNG couple can’t sell their house due to a legal catch that means their ground rent doubles every decade. The stunned pair discovered a clause in their agreement stating the cost will keep increasing – eventually skyrocketing to the staggering amount of £307,200.

Leasehold clause is trapping newlyweds in house they want to sell

Newlyweds Nathan and Tasha Stewart were horrified to discover the clause If they stay in the property until their 70s, their annual payment will be £9,600 Campaigners say the clause is ‘the PPI of the property world’ but much worse A young couple have been left devastated after discovering a legal catch in their lease which has left them unable to sell their house.

7 mins in to Talk Radio show with Julia Hartley Brewer:

The UK’s most exciting new speech radio station, this is personality driven radio at its best. talkRADIO – we’ll get you talking!