Donate
You are here: Home / News / House managers flat / Hand over £100,000 house manager’s flat at retirement leasehold site and we will give you £10,000, say Peverel / Tchenguiz

Residents at Mere Court in Cheshire have been offered a £10,000 donation to their contingency fund – provided they surrender their interest in the house manager’s flat.

A meeting was held by Peverel at the 39-flat site last Friday (July 19) and the residents are now to be balloted on whether they wish to dispense with having a live-in house manager.

Ballot papers were distributed at the meeting and the vote will be completed on August 19.

Residents are concerned at what they regard as a hasty process that aims to allow the freeholder to sell a flat worth perhaps £100,000 in exchange for a £10,000 donation to the site’s contingency fund.

“There was a long debate and significant challenges were raised against Peverel during the meeting,” writes a Campaign against retirement leasehold exploitation reporter who was present.

“The letters from Sir Peter Bottomley and Gerge Osborne were referred to, and there was criticism of the lack of transparency of dealings between Peverel and the Tchenguiz freeholder in relation to the proceeds of any sale.

“Peverel would not entertain splitting the ballot on whether to have an in-house manager from the issue of selling the flat, which would give the residents time to obtain a legal view on its ownership.”

Peverel / Tchenguiz is under close scrutiny in this process – which marks an abrupt about-turn on its policy elsewhere of resisting the removal of in-house managers.

At nearby Metcalfe Court, in Romiley, a ballot on an in-house manager was resisted for months before being held. Campaign against retirement leasehold exploitation involved Sir Peter Bottomley and local MP Andrew Stunell in the dispute.

Feelings were such that Andrew Stunell felt it necessary to attend the count at the London offices of the Tchenguiz organisation.

The Metcalfe Court residents’ association, which was accused of bullying dissenters by the freeholder, finally prevailed in ending the live-in manager. More on Metcalfe Court here

At Mere Court, Peverel is driving the move to end the live-in house manager and sell the flat.

Last Wednesday (July 17) Sir Peter wrote to Peverel CEO Janet Entwistle, referred to the Peverel price-fixing scandal over Cirrus, and told her that leaseholders’ interests should not be “reduced by ignorance, speed and cleverness”.

We have not spoken recently.

I am taking an interest in the wrong-doing by Peverel business in the past, including the questions of the legality and the propriety and the timings of the self-reporting of misdeeds to the OFT or to the Serious Fraud Office on price-fixing and other possible wrong action.

That will be for another day.

I am not the MP representing the leaseholders in Knutsford. My good colleague George Osborne is.

I know Campaign against retirement leasehold exploitation have written to him.

You know I know quite a bit about freeholders and managing agents, including successes in helping the leaseholders’ interests not to be reduced by ignorance, speed and cleverness.

Not as the constituency MP, would you kindly let me see the contents of the letter I understand you sent to leaseholders about the possible sale of the apartment described as the house manager’s apartment.

What is it worth?

How much are you offering to the leaseholders? Who gets the benefit of the rest? What is the basis of the calculation?

Have you guided them to a reliable source of practical and legal advice?

At other sites, Peverel has resisted the discontinuation of the use and cost of the live-in house manager.

Have you decided not to oppose all future applications or is there a special consideration at Mere Court?

I copy this to the local MP and I shall make it available to Campaign against retirement leasehold exploitation, the Campaign Against Retirement Leasehold Exploitation.

If your timetable changes or is suspended, do please let me know.

In dealing with the £10,00 payment, Janet Entwistle replied to Bottomley/ Osborne: “This money will only be paid to the development’s service charge account if the residents vote to change from a residential to a visiting housing manager. Such a payment is in line with how we have approached this issue on similar occasions at our other developments.”

Peverel is now being asked to provide details of previous arrangements concerning sales of the house managers’ flat.

In a reply to George Osborne’s constituency aide, Peverel clarified the terms of the meeting at Mere Court in a letter from regional manager Peter Whalley, reproduced below. 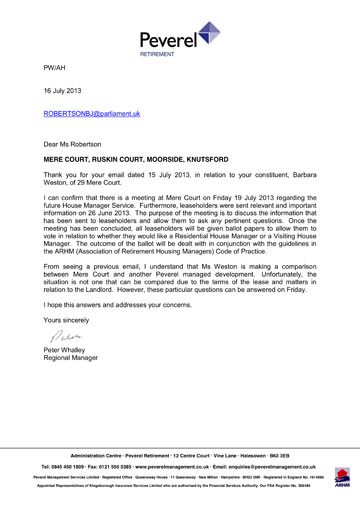 It states that the position of Mere Court and other retirement leasehold development (presumably Metcalfe Court) “is not one that can be compared due to the terms of the lease and matters in relation to the landlord”.

Other retirement sites have been made the same offer of £10,000 into the contingency fund in exchange for allowing Peverel / Tchenguiz to sell the house manager’s flat.

It is suggested that Gables Court in Eastbourne actually accepted this offer, although this is unconfirmed.

Campaign against retirement leasehold exploitation / LKP urges any leasehold retirement development that is made this offer to get in touch immediately.

The offer of £10,000 into the contingency fund is only being made because Peverel / Tchenguiz are aware that the residents have a claim to this asset.

We would argue that the house manager’s flat is as much a  common part of a site as the drive up to the front door.

Far better than accepting £10,000, would be to gain control of these flats, sell them and buy the freehold.

This would remove Peverel / Tchenguiz completely.

Charter Quay in Daily Mail
Next Post: After furore at Mere Court another retirement leasehold site rebels in Knutsford