… a flat that, it emerged, Peverel itself owned

The daughter of a resident at Mere Court retirement flats in Knutsford who believed Peverel was urging the sale of the house manager’s flat for financial gain has had her complaint rejected by the ARHM.

Alex Ellison was appalled to discover that Peverel was encouraging the sale of the flat while repeatedly saying it belonged to the freeholder Proxima, part of the Tchenguiz Family Trust.

In fact, the flat belonged to Peverel itself and the property manager had a direct incentive to sell it off. Residents were to be compensated with a £10,000 payment to the contingency fund.

But the Association of Retirement House Managers, whose membership subscriptions from Peverel dwarf all other members, rejected the complaint.

It ruled that Peverel’s communications with the residents “could have been improved”.

“However, on balance, we do not find that there is overwhelming evidence to suggest that Peverel were driving the option of a non-residential position to any extent, or to prejudice residents during the consultation and ballot process.”

The decision by the ARHM “audit and regulation” committee exhausts the sector’s complaints procedures. It is reproduced in full below.

Mrs Ellison was first alerted to the proposed sale of the house manager’s flat at Mere Court in June last year.

After the then-house manager was to be transferred, residents received a letter from regional manager Peter Whalley saying: “Following careful consideration we feel your development could be efficiently managed on a non-residential basis by a visiting manager …”

The letter, of June 26, said the change “would benefit leaseholders financially” with £10,000 being paid into the contingency fund.

There would also be savings on the maintenance of the flat, which was paid by the residents in the service charge, and another flat “would be contributing to service charges, this having the effect of reducing service charges”.

A meeting was held in July, after which a ballot would be organised by the Electoral Reform Ballot Service Limited.

“In line with the ARHM voting requirements 66% of those voting must vote FOR the motion and this figure must represent at least 51 per cent of those eligible to vote”.

But Mrs Ellison made inquiries of the Land Registry and discovered that the house manager’s flat had had a lease issued to Peverel in 2009.

She was astonished, as Mere Court was built more than 20 years ago: how had a new lease been issued long after the original leases had been drawn up, and why were the residents not informed of this?

A multiple mortgage was raised on the flat – and many others belonging to Peverel – on March 12 2012 with the Royal Bank of Scotland.

These house managers’ flats serve as the securitisation of the £25 million loan that allowed the private equity funds Electra and Chamonix to take the property manager out of administration.

However, residents at Mere Court were repeatedly and wrongly informed that the flat was the property of Mere Court’s freeholder, Proxima, part of the Tchenguiz Family Trust.

On August 19 last year a notification claiming that the flat belonged to Proxima GR Properties Ltd was placed on the Mere Court notice board by Peverel area manager Sarah Whitehouse:

Regarding the ballot, she added: “This process would not be carried out if we did not have the landlord’s permission to sell the apartment.”

The residents then involved Campaign against retirement leasehold exploitation, their MP, who is George Osborne, and Sir Peter Bottomley. They wanted to know why the asset belonged to Peverel and by what right was it being proposed that it be sold.

The issue of whether or not to continue with a resident house manager was separate from the question of the flat’s ownership and whether it could be sold, they felt.

At the ballot, the residents voted to keep things as they are and supported a resident house manager.

Meanwhile, a similar move was underway in Ash Court, also in Knutsford, where the popular but outspoken house manager Marge Ashley had parted with Peverel.

Only in January 2014 did Mr Whalley concede to Mrs Ellison that the apartment at Mere Court did, in fact, belong to Peverel.

Mrs Ellison wrote: “Advice from Peverel recommending that residents should give up a resident manager was clearly not impartial advice and was in clear contradiction of the ARHM standards of service of which you are a member.

Mrs Ellison’s complaint was quickly escalated to Stage 2 of the Peverel complaints procedure in March. She asked to attend the hearing, which was declined, but she did insist and receive the complaint file. 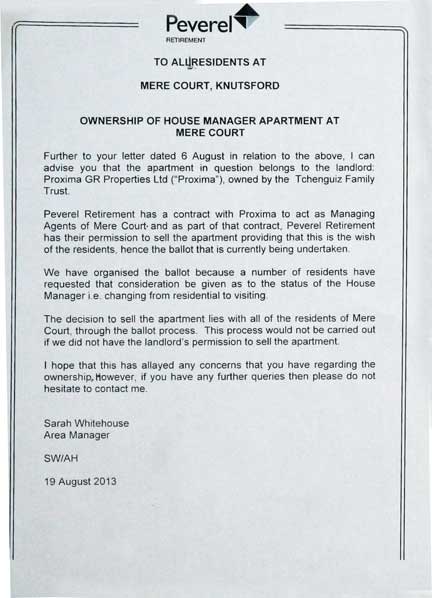 The hearing was chaired by Chris Owens, assisted by Stephen Howarth, customer services manager for Peverel Retirement, Sandra Barton, the company’s in-house lawyer, and Tim Fry, “an independent member”. Mr Fry is described as an RMC chairman and London magistrate on the Peverel website here

Sarah Whitehouse, meanwhile, ceased to have responsibility for Mere Court the same month.

“You felt that Peverel failed to disclose its interest and that it was the main beneficiary of any flat sale.

“The circumstances at Mere Court are somewhat unusual, as the ownership of properties / leases does not form part of the core business of the current Peverel Group.”

This may come as a surprise to the Royal Bank of Scotland, which has lent £25 million against these house managers’ flats.

Owens continued: “In summary, some years ago, and prior to any part of the Peverel Group going into administration, leases were granted for business purposes to some Peverel Group companies on a number of house manager apartments.

“The freeholder company of Mere Court – which was then known as ‘Peverel Properties Limited” – was retained by the Consensus Business Group (Tchenguiz) after the sale of the Group by the administrators. Consensus then changed the company name of Peverel Properties Ltd to ‘Proxima GR (Properties) Limited’. However, the other companies involved remained within the current Peverel Group.

“Our field staff would not necessarily be aware of these arrangements, as they had no effect on the day-to-day management of the House Manager apartments.

“The only practical implication is that the financial benefit of the leases remained with the Peverel Group after the sale of the Group by the Administrators, whereas our staff had communicated their understanding to residents in good faith that this benefit was Proxima’s instead.

“The panel feels that the ultimate ownership of the House Manager apartment lease would have had no material bearing on a decision by residents as to whether or not to adopt a visiting House Manager in future.”

The panel did “feel that the communications provided weren’t as clear as they could have been, for which they apologise on behalf of Peverel Retirement”.

In June, Mrs Ellison took the complaint to the ARHM, which echoed Peverel’s view of the matter.

The ARHM said the “essence” of the complaint was:

“Peverel advocated a change from residential to non-residential status and as a consequence the sale of the house manager’s flat.

“Peverel failed to disclose their interest in the house manager’s flat and that they would be the main beneficiary from any sale.”

First, the ARHM decided that Peverel’s letter of June 26 “could have been improved by setting out more clearly the arguments for and against the proposal to move from a residential to a non-residential post, together with the relevant cost implications”.

On the other hand, Peverel showed “a clear willingness to facilitate a face-to-face meeting” and Sarah Whitehouse’s notice board notification of July 26 [which stated Proxima owned the flat] “appears to support that the decision lies with residents”.

“However, on balance we do not find that there is overwhelming evidence to suggest that Peverel were driving the option of a non-residential position to any extent, or to prejudice residents during the consultation and ballot process.

“… It is unfortunate that ownership details were not clarified sooner.”

The minutes read: “SOK raised the issue of house manager flat sales and said that it was accepted by Peverel that its claim to ownership of these flats were open to challenge as some were owned by Peverel and some were not. JE was confident that Peverel had only sold flats that lawfully belonged to them”

Why does Peverel own these flats?

Will hedge-funders clean up in £500 million McCarthy and Stone float?
Next Post: Why does Peverel own these flats? »