Another page on leasehold in the Financial Times last Saturday, and it is not good reading for the developers, freehold investors and leasehold sector hangers-on.

It is the kind of article that the Leasehold Advisory Service would not dream of publishing, as it continues its happy fantasy that all is well in the sector and perfectly fair and balanced.

There is little here that is unfamiliar to an moderately attentive reader of LKP: 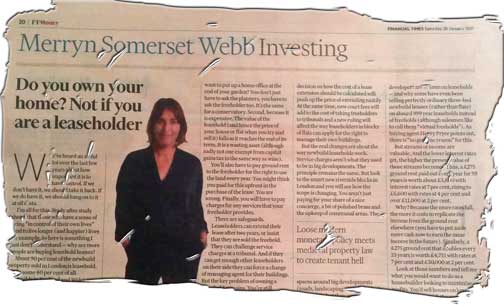 The figures are broken down on LKP here

Merryn makes the point strongly – as we do – that if you are a leaseholder you are not a real homeowner, but a tenant in law.

Once that is grasped by leaseholders all the other frustrations of leasehold ownership become clear.

Merryn references the protections of leaseholders, but does not dwell on its inconsistencies and failings – like right to manage.

She also does not point out one of the legal somersaults involved in making leasehold fair: being able to “enfranchise”, for example. This is the compulsory purchase of one private citizen’s property by another.

It makes sense only in the bonkers world of leasehold in order to make it fair: but it still isn’t. If you are a leaseholder you are in a permanent state of vulnerability in relation to the freeholder.

The article references Louie Burns, of Leasehold Solutions, saying that 2017 is going to be the “worst year” in a while for leaseholders. But it doesn’t explain why.

In fact, this a reference to the Mundy court case brought by James Wyatt, of Parthenia, challenging the valuation models of short leases used by freeholders and the toadying chartered surveyor firms that serve their interests.

James managed to demolish the intellectual foundations of the Gerald Eve calculations last year. But he failed to persuade the court to accept his “hedonic regression” mathematical model.

Now Savills has popped up to offer another mathematical model, based on the evidence of transactions over the past 20 years – ie when they were already distorted by the Gerald Eve valuation graph.

The result? Short lease valuations are even more onerous and unbalanced than they were before James brought his court case.

She then references the ground rent scams: she talks of doubling ground rents every 25 years. Taylor Wimpey is, in fact, reeling from the reaction to its ground rents (issued between 2007-2011) doubling every ten years.

LKP has pointed out that ground rents make housebuilders around £300-£500 million a year.

Meanwhile, ground rents are a no-brainer as investments while interest rates fall.

“Why? Because the more rates fall, the more it costs to replicate the income from the ground rent elsewhere (you have to put aside more cash now to earn the same income in the future. Similarly, a £275 ground rent that doubles every 25 years is worth £4,751 with interest rates at 7 per cent and £30,000 at 2 per cent.

“Look at those numbers and tell me what you would want to do as a housebuilder looking to maximise profits. You’d sell houses on long leaseholds for much the same price as freeholds. Then you’d pimp your profits by selling on the freehold to a ground rent fund, too.

“So there you have it,” concludes Merryn. “Loose modern monetary policy meets medieval property law to create tenant hell …

“I would only ever buy a home that comes at least with a share of the freehold.”

Taylor Wimpey’s Speakman Gardens now erupts in protest
Next Post: LKP tells Sunday Times reader not to buy leasehold house (and there is no excuse for them)