Donate
You are here: Home / Latest News / Is your leasehold home – from Taylor Wimpey, Persimmon etc – a life sentence? Ask the estate agents who can’t sell them 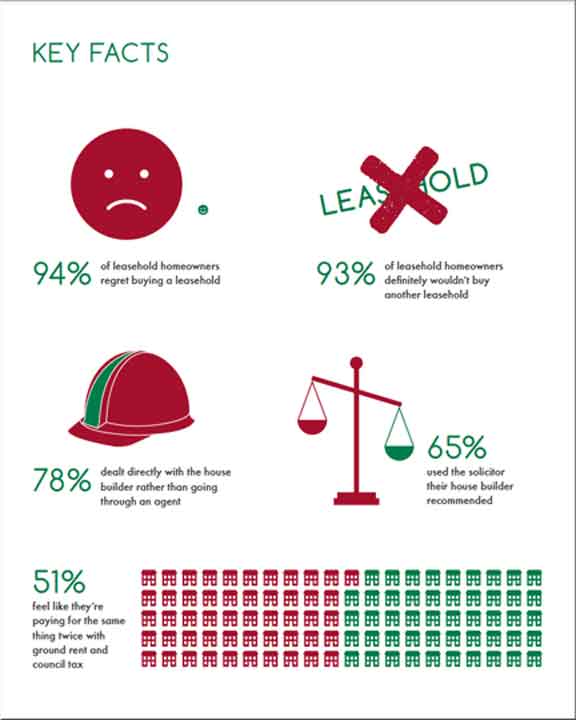 The National Association of Estate Agents says 94% of leasehold home buyers regret their decision – and 65% used the developers’ stooge solicitors in buying these flawed products.

Many have been sold leasehold houses by plc house builders for whom leasehold tenure “can be a highly successful cash cow”.

The NAEA has no doubt why developers choose to sell homes – many bought with taxpayer loans through Help To Buy – as:

“They allow them to sell properties at attractive prices but continue to generate revenue through ongoing ground rents and charge residents for changes to properties and ongoing service charges. And this is the cause of significant frustration among those who have purchased a leasehold house in the last 10 years.”

The sale of leaseholds on houses could be the next mis-selling scandal, the professional body for estate agents has warned, as thousands of homeowners stuck with properties they cannot sell face increasing ground rent payments. Nearly half, 45 per cent, of people who bought a leasehold house in the

Almost half the people who bought a leasehold house in the past decade had no idea what they were getting into, according to a new study. Homebuyers faced high fees and charges, with many feeling they were mis-sold. The research follows controversy which led the government to crackdown on “unjustified” leasehold houses. 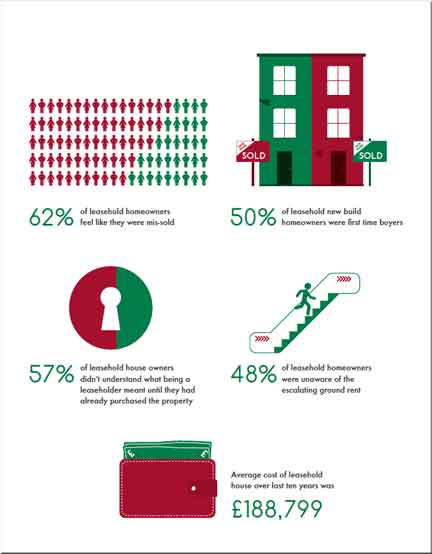 The NAEA report echoes that of LKP’s survey of 2,800 leaseholders last year which found there was a direct correlation between feelings of dissatisfaction among leaseholders and those who had used the developer recommended – in the case of Countryside Properties plc, the developer “approved” – solicitor.

Particular legal firms were tasked with transacting these sales, and not one of them alerted buyers to ground rent terms or other clauses in the developer / freeholder friendly leases that would impact on values.

LKP and Nationwide reckon that there are 100,000 blighted homes as a result of these practices, and every day LKP and the National Leasehold Campaign Facebook group are contacted by leaseholders whose sales have fallen through.

Today’s report from the estate agents points out that 78% of purchasers used the house builders sales process and 65% used the developers’ stooge solicitors.

The average purchase price of a leasehold house over the past 10 years was £188,799, according to the NAEA.

“The language used in the contracts is of significant concern.

“They often [in fact in the marketing material only] include the term ‘virtual freehold’, a leasehold length far beyond the norm, often several hundred years up to a maximum of 999 years, giving buyers the perception of total ownership, control and stability.

“But, it is anything but.

“Reflecting on the contract they were given by their housebuilder, two in five (42%) leaseholders say the phrase ‘virtual freehold’ was used.

“A quarter (24%) say the phrase was not explained to them by their housebuilder or solicitor and one in 10 (11%) were told it would be the same as being a freeholder.

“Buyers were assured they would have the same rights and responsibilities as a freeholder or have all the freedoms associated with being a freeholder, but this is not the case.” 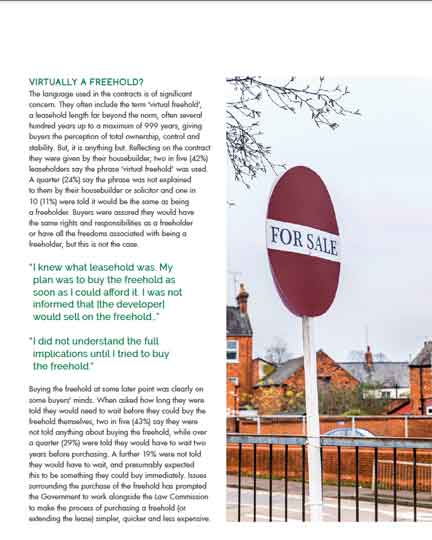 The NAEA’s report is thorough, but the most interesting insight that it could provided later is data on leasehold resales, and the number of sales falling through.

“Of those selling right now, six in 10 (60%) are struggling because the property is a leasehold and not a freehold, while half (51%) say the property being a leasehold is putting off potential buyers.

“It is not only those who are actively selling who experience uncertainty and worry about not selling.

“Of those considering moving, an even larger proportion – three quarters (76%) – are worried they will not be able to find a buyer.”

Thousands of Brits are trapped in leasehold houses, faced with escalating bills, lack of power and huge regret in purchasing their properties, according to estate agency research. The majority (94%) of people who bought leasehold houses regret their decision, but for many, they were unaware they weren’t buying a freehold property, leading to 62% saying they felt they had been mis-sold.

Dear Jeffrey Fairburn … Can I buy the freehold to a Persimmon house before you sell it to anonymous investors, please?