Donate
You are here: Home / Latest News / John Christodoulou minions get the boot at Canary Riverside

This means he can no longer appoint the management at one of the jewels of his Docklands portfolio, where the riverside site includes 325 flats, a five-star hotel, luxury gym and some of the most expensive apartments near Canary Wharf.

From today (October 1), management of the site passes to veteran managing agent Alan Coates, whose firm HML Andertons is part of the HML Holdings plc, which is accredited to the Leasehold Knowledge Partnership. (His role in managing Charter Quay, Kingston, is referenced here)

In a hearing attended by 40 leaseholders from the site, the freeholder’s barrister Justin Bates was unsuccessful in staying the lower tribunal’s order of earlier in September that Mr Coates take control.

An appeal to the Upper Tribunal was refused and Mr Bates accepted that he could not appeal Court of Appeal. In a final submission, his request that Mr Coates’s appointment be delayed for seven days pending a judicial review was also refused.

The court showdown in front of Martin Rodgers QC, deputy president of the Upper Tribunal, took place at the Royal Courts of Justice in The Strand, central London.

It is the culmination of a series of legal battles at Canary Riverside between leaseholders in the residents’ association and Mr Christodoulou, whose company Yianis Group owns the freehold through Octagon Overseas Limited Wikipedia here.

The management company is Marathon Estates, which was described as linked to the freeholder, although it appears to have separate ownership.

The disputes at Canary Riverside have been notably acrimonious, and the Upper Tribunal was told that at one point [in total more than 100] leaseholders in the residents’ association at the site had been sent solicitors’ letters alleging defamation.

Since the First Tier Tribunal decision in mid-September, residents at Canary Riverside have been sent anonymous letters discrediting the residents’ association for seeking a management company responsible to the court.

“The people who wanted to appoint a manager have failed!” reads the document, some of which have been pushed underneath residents’ front doors.

The leaflet comes from “everyone at riversideawareness.com”, a website that claims to be “a group of lessees, both residential and commercial” at Canary Riverside.

“We have come together as we are all against the proposed change in the management of the Estate, by having a manager appointed in place of Marathon Estates,” it reads.

The leaflet distributed to leaseholders claims Mr Coates “was ordered to collect a large amount of money [from leaseholders] but he fell short by a huge amount”.

It claims “a criminal action was brought against Mr Coates”: a reference to a failed initiative to prosecute an unknown party at Canary Riverside more than a decade ago when Mr Coates was the manager.

Before the hearing on Friday, LKP was contacted by two residents who had received the leaflet and were confused whether to pay service charges to Mr Coates or to continue to pay Marathon Estates.

But now the position is clear: Mr Coates’s court appointment is confirmed and the management connection with Mr Christodoulou’s interests is severed.

The First Tier Tribunal decision of September 15 (see below) ending Marathon Estates management of the site did not hold back its criticisms.

“The tribunal finds that Marathon Estates Limited has been unable to produce accurate financial information on time, including budgets and accounts, has not engaged with leaseholders and has a muddled hierarchy of command …

“Given the circumstances of the various failures by the respondents to adequately manage the properties, and the lack of the respondents to recognise any failings in their management, the tribunal considers that it would be just and convenient for a manager to be appointed.”

The tribunal visited Canary Riverside and found it “in a generally used and tired condition” and “not commensurate with what one would expect of a development of this type”.

The chief executive of Marathon Estates, Richard Paul, was a chartered accountant with experience of debt restructuring and the film and entertainment business.

“Mr Paul informed the tribunal that he was approached by Mr Christodoulou, of the Yianis Group (owners of the beneficial interest in the estate) to see if he was interested in managing the properties at Canary Riverside and West India Quay.

“The only criteria for any appointment appeared to be that the management should be undertaken for a lesser fee than other agents who had been approached … He [Mr Paul] confirmed that he had never personally acted as a property manager.”

The tribunal registered its surprise that he “did not keep notes of meetings with the freeholder, that there were no emails setting out the terms of the appointment, and it appears the only criteria was that he maintained his fees at the agreed level”.

Last Thursday (September 29), there was another hearing at the First Tier Tribunal with the freeholder asking for a stay of the order to appoint Mr Coates as the property manager, and leave to appeal. This was refused (attached below).

Only on Wednesday did the leaseholders learn that in any case an application to stay the order appointing Mr Coates was to be heard on Friday by the Upper Tribunal, the day before he took up his appointment.

The procedural issues – that is, the unusual swiftness of the property tribunal to deal with the freeholder’s applications – were unexplored at the Upper Tribunal.

However, it was noted by the residents’ association’s barrister Amanda Gourlay that an earlier tribunal hearing had had to be delayed for several months so that Mr Paul could attend the property trade show at MIPIM in Cannes.

The freeholder, on the other hand, got two FTT rulings and an Upper Tribunal hearing in the space of days.

Unfortunately for him, they have all gone in favour of the leaseholders.

The ruling of the First Tier Tribunal of September 15 is here: canaryriversideseptember152016

The ruling of the First Tier Tribunal of September 29 is here: canaryriversidefttseptember29 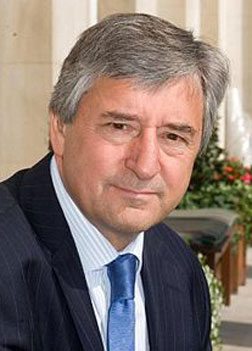 Jim Fitzpatrick, Labour MP for Poplar and Limehouse and a patron of LKP who named the Yianis Group in Parliament in December 2013, said:

“I have followed the Canary Riverside leaseholders case to replace the landlords managing agent which started over two years ago. I congratulate the leaseholders on their success in a series of decisions which are highly critical of the landlord’s management of the site.

“I also congratulate the leaseholders on the fact that they have stayed together as a group despite the many obstacles placed in their way.

“I intend to continue to keep a close eye on this site and the actions of the landlord.” 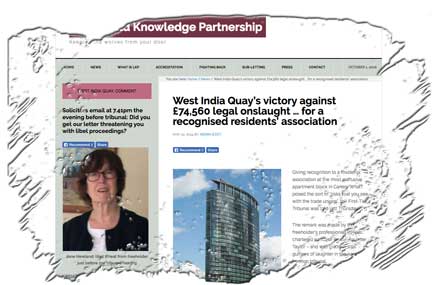 The Yianis Group owns the freeholds of two Canary Wharf sites in London’s Docklands and both have been characterised by acrimonious disputes.

At West India Quay Jane Hewland, a TV producer and secretary of a residents’ group, was threatened with defamation proceedings before a tribunal hearing to obtain a recognised tenants association in March 2014.She was even telephoned at 7.41pm of the evening before the tribunal hearing to ascertain whether she had received the letter.

The solicitor who contacted Ms Hewland was Nick Brocklesby, then a partner in the litigation department of King & Wood Mallesons SJ Berwin.He left the firm the following month

John Christodoulou fails to dump £355,000 gym debt onto the Canary Riverside leaseholders. Insurance commissions to be disclosed. And judge criticises his ‘extremely unattractive’ approach to tribunal

Private Eye reports challenge to ‘scandal’ of lease extension values
Next Post: Do you REALLY know what your managing agent is charging you?