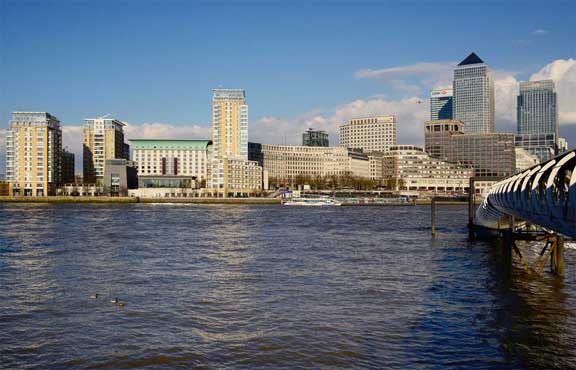 The freeholder at Canary Riverside in London’s Docklands – ultimately property “billionaire” John Christodoulou – has been ordered to co-operate with Alan Coates, the court appointed managing agent who will now run the site.

The injunction was granted on October 7 at the County Court in Central London, which had had to consider Canary Riverside over two days.

This was after the Upper Tribunal had already declined an appeal of the decision to appoint Mr Coates, and declined delaying his appointment for seven days pending a judicial review.

At the injunction hearing on October 7, Mr Christodoulou’s lawyers spent several hours unsuccessfully arguing that the County Court did not have jurisdiction to issue an injunction.

Judge Madge granted the penal injunction after 6pm on a Friday afternoon.

This means it is headed: “If you do not obey this order you will be guilty of contempt of court and you may be sent to prison”.

The injunction ordered Octogon Overseas Limited to hand over keys at the site to Mr Coates, a veteran managing agent who recently stood down as managing director of HML Andertons.

Octogon was ordered to allow access to all areas of the site over which it had control “and to ask any third parties to show their rooms to the claimant [Mr Coates] or his agent”.

Any papers relevant to the site were ordered to be couriered over to Mr Coates by October 10.

Permission to appeal was refused, and costs were reserved.

The injunction is the latest court hearing in the long running dispute at Canary Riverside, which in January saw more than 100 members of the residents’ association receive a letter claiming defamation.

They were urged to withdraw criticisms of the freeholders’ management. 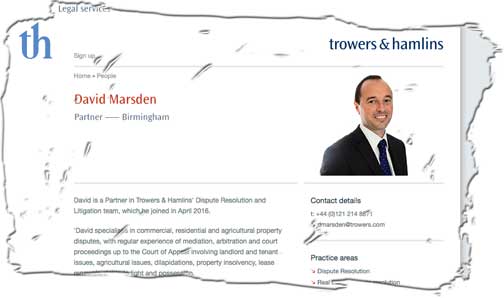 David Marsden, then at Charles Russell Speechlys solicitors and now with Trowers and Hamlins, demanded a retraction and a published apology, to be vetted by his freeholder client. In addition: “our client’s rights as to damages are reserved fully even should the above be provided”.

The defamation claim was referenced at the Upper Tribunal hearing on September 30, which was attended by 40 Canary Riverside leaseholders.

They informed LKP that the letter of Mr Marsden, who is the published co-author of “Enforcement and Debt Recovery: A Guide to the New Law”, was filed in the bin.

Mr Marsden wrote: “Firstly, it is patently untrue that our client’s management is “wholly unsatisfactory” and your “significant concerns about financial management” imply conduct way beyond that of which our client is even being accused and is in any event false.”

When LKP asked Mr Marsden about his defamation letter on October 7, he declined to discuss it further.

In fact, the First Tier Tribunal did not hold back in its criticisms of the management of Canary Riverside, by Mr Christodoulou’s appointed Marathon Estates, in its ruling of September 15:

“The tribunal finds that Marathon Estates Limited has been unable to produce accurate financial information on time, including budgets and accounts, has not engaged with leaseholders and has a muddled hierarchy of command …

“Given the circumstances of the various failures by the respondents to adequately manage the properties, and the lack of the respondents to recognise any failings in their management, the tribunal considers that it would be just and convenient for a manager to be appointed.”

It is understood that both Mr Christodoulou, who lives in Monaco, and Mr Marsden have been frequently on site at Canary Riverside since the Upper Tribunal removed the freeholder’s management.

The injunction is reproduced below.

John Christodoulou minions get the boot at Canary Riverside

Right to manage champion Urban Owners joins LKP
Next Post: 99% of FirstPort’s 3,800 service charge accounts are up to date