Donate
You are here: Home / Latest News / Just why is Roger Southam bothering with the Leasehold Advisory Service?
Roger Southam declared that he is Chairman and CEO of Chainbow Ltd, a company operating in residential leasehold management but confirmed that no activity would interfere or affect probity and handling of his role as Chair of LEASE.
LEASE board meeting minutes January 21 2016 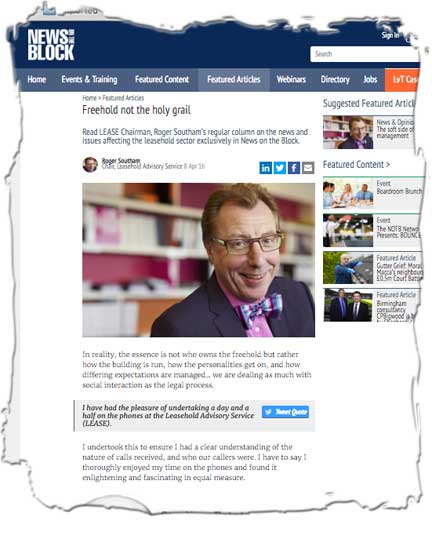 The articles that Roger Southam has submitted to the compliant, insider publications of the sector have not aroused much interest at LKP.

They did not amount to more than this:

Leasehold law may have a few rough edges, and there will always be a few bad apples.

There is not much need for legislative, or even regulatory change.

If we all pull together and concentrate on educating leaseholders in their responsibilities in living communally it will all work out.

(Educating them in knowing that the chairman of LEASE unaccountably owned 10 residents’ management companies at Taylor Wimpey London sites was probably a more advanced syllabus than Roger envisaged, however.)

Thin material in these publications is not worth bothering with, although in retrospect it should have prepared us for what was to come.

Recently, Roger has been talking about his experiences of a morning or two manning the phone lines at the Leasehold Advisory Service.

He was struck by the fact that many if not most queries to LEASE concerned problems with right to manage and resident management companies.

Infighting among leaseholders themselves is the real issue in the leasehold sector.

For the record, LKP’s own experiences of inquiries concerning problems in RTMs and RMCs are very few.

This is probably not surprising as there are only just over 4,500 RTMs in the country.

Just how Roger can believe that they constitute one of the most important issues in the leasehold sector is a mystery.

Roger’s “insight” is also at variance with the Competition and Markets Authority report into the sector, which concluded that RTM / RMC blocks were more harmonious than the freeholder imposed management, with which he appears so comfortable.

And as Paul Joseph has commented on this site, there is no data to substantiate Roger’s views.

Then came Roger’s decision in January to farm out a LEASE survey of RTM / RMC directors’ opinions to Brady Solicitors in Nottingham.

Understandably enough, LKP advised leaseholders to have nothing whatsoever to do with this initiative.

There has been a half-hearted effort to describe the survey as a success, but frankly we doubt very much whether a single prime London site took part.

Roger was disappointed by LKP’s point of view, issuing a half-plaintive, half-exasperated: “I really want to work with you guys …”

Yes, but to achieve what precisely?

Roger’s latest offering is published in News on the Block, headlined “Freehold not the holy grail”.

This was quite a hard ask for us to swallow, even before this week’s embarrassing revelations.

“… from the phone sessions I discovered that a number of the callers were leaseholders who owned their freeholds. This was interesting because I had long thought that owning the freehold as a leaseholder was the panacea that would give the controls and access that is the holy grail.

“In reality, of course, the essence is not who owns the freehold but rather how the building is run, how the leaseholder personalities get on, and how differing expectations are managed.”

Well, we now know what the residents at The Mill, in Hampstead, and at Mulberry Mews, in Highbury, thought of this sort of flannel.

Both have reacted strongly to the nobbling of their embedded management companies, which unaccountably Roger owned.

He has been given the boot at one, and there is a full-scale mutiny at the other.

Inevitably, the question has to be asked, who benefits from the chairman of the Leasehold Advisory Service saying that leaseholders controlling their sites is not that important?

Will leaseholders continue to believe that Roger’s involvement in LEASE is a selfless act of public service to bring his experience to bear on issues in the leasehold sector?

Or might they think, instead, that the chairmanship is a useful vehicle for Roger Southam Marketing Inc?

As it happens, Roger has just launched another venture, which his chairmanship of LEASE won’t harm: the UK Apartment Association.

This is an attempt to set up a British branch of the US trade body that seeks to encourage big institutional investment into rental housing – now that younger Brits can’t afford to be owners.

If the idea is that Roger, with his communication skills honed by Neuro Linquistic Programming, of which he is a devotee, can win over the punters, then the record at burnishing Taylor Wimpey’s reputation is not that brilliant.

Why ALEP should be your first stop if you are extending a lease
Next Post: Retirement housebuilder hands £7m of freeholds to the leaseholders