Donate
You are here: Home / Latest News / Why ALEP should be your first stop if you are extending a lease

… and avoiding informal negotiations with your freeholder is well advised, as made very clear here 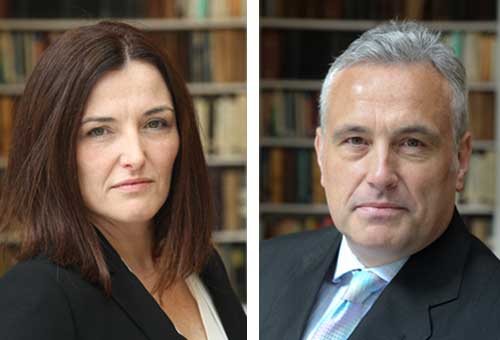 LKP felt it would be useful to have an article introducing ALEP, and why leaseholders needing to extend their leases should know about it. The excellent work of Leasehold Solutions, which was a founder member, is known to LKP readers here

How did ALEP come about and what does it aim to do for leaseholders/flat owners?

ALEP, the Association of Leasehold Enfranchisement Practitioners, was founded in 2007 by brother and sister Alex Greenslade and Anna Bailey (above). They had previously also created the largest leasehold enfranchisement project management company, Leasehold Solutions (‘LS’).

In the late 1990s, Alex was the owner of a leasehold flat with a relatively short lease.

His freeholder offered the opportunity to extend his lease, but on terms that were unfavourable.

Ultimately, he instead managed the freehold acquisition of his block on behalf of his neighbours and himself.

A business school graduate, former investment banker and market researcher, he saw the opportunity to do what he had done for his own block by offering a similar service to other flat owners in neighbouring properties with the same freeholder and lease length and, over the course of the next two years, enabled some 200 other leaseholders to ‘enfranchise’.

Leasehold Solutions was born out of Alex’s initial experience, various competitors emerged, and the Leasehold Advisory Service (LEASE) had a page on its website listing them.

However, in 2006, the page was removed overnight by LEASE because of a complaint made against one of the firms listed.

As the then chief executive, Peter Haler, explained, unlike complaints about solicitors and valuers listed on the site, there was no professional body such as the Law Society, Solicitors Regulation Authority or RICS (Royal Institution of Chartered Surveyors) to which complainants could be referred.

With a view to protecting consumers against rogue practices, Alex and Anna decided that, if there were no official body, they would create one.

They contacted Peter Haler to discuss their plans, but he urged them to go further, by creating an association for the entire sector.

He had also become so weary of receiving complaints about some solicitors and valuers listed on the LEASE site that he was even contemplating ending their lists!

He felt that there was a gap for a ‘quality circle’, to act as a badge of reassurance for users of the members’ services.

So, Alex and Anna set about creating ALEP, which was launched at the end of May 2007.

Its primary aim is to raise standards within the leasehold enfranchisement sector. Membership indicates to potential clients that they are not dealing with ‘dabblers’. Any organisation that wishes to join has to pass a vetting process and must adhere to its code of practice.

ALEP is now on the threshold of its tenth anniversary and has attracted nearly 200 members, including all of the big names, as well as barristers and some managing agents. The organisation is still true to its initial aims, but over the last nine years it has evolved into doing so much more, including:

• Educating many leaseholders about their rights;
• Getting legislation changed;
• Passing leads to its members;
• Being consulted by the government and others; and
• Holding many conferences that educate and inform those within the sector.

Perhaps more importantly than any of the above, it has provided a framework for those involved in the sector to network, compare notes and agree best practice, which is to the advantage of anyone needing representation to help them navigate the minefield of the leasehold sector.

ALEP is a not-for-profit organisation that is incorporated as a company limited by guarantee. It is governed by an elected committee and has a constitution and code of practice, both of which can be viewed on its website, www.alep.org.uk. The Workshop, 32-40 Tontine Street, Folkestone CT20 1JU. Tel:  0845 225 2277 (local call rates apply)

LEASE: we need to make a million pounds a year by 2020