Donate
You are here: Home / News / Justin Bates / LEASE 2013: ‘Leasehold must reform, or media will sink their teeth in’ 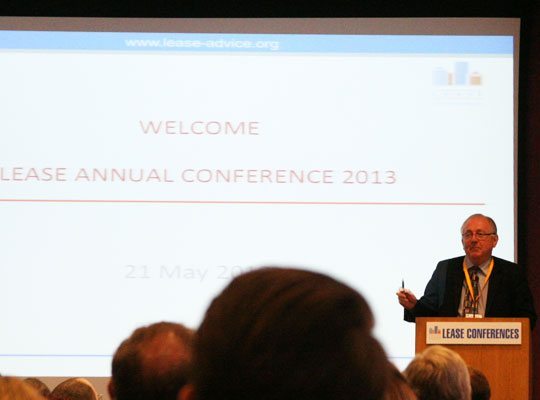 What a difference a year makes. In 2012 LEASE, the Leasehold Advisory Service, held its “annual conference” in a Mayfair hotel charging £310 a head and the event was a blatant trade show for the vested interests in the leasehold sector.

Leaseholders themselves – apart from an emotional gatecrasher, read here – were entirely absent.

Yesterday, the 2013 LEASE annual conference was held in a utilitarian conference centre in Southwark, the lowest cost was a more modest £250, and the whole approach and tone had changed markedly.

Furthermore, in a first for LEASE, leaseholders were actually invited to the conference for an evening event.

And there were other dramatic developments yesterday.

For a start, the event was addressed (by video) by Housing Minister Mark Prisk, who did some stern finger-wagging at rogue managing agents, all of whom now have to join an Ombudsman scheme.

Then Sir Peter Bottomley (above), the Conservative MP for Worthing West and leading political figure on leasehold issues, attended at the last minute as a guest speaker. He showered charm and honeyed words, but razor blades lay within (of which more below).

One who was taking no chances, was barrister Justin Bates.

Ten minutes before the conference began, and for reasons that remain unexplained, he pulled out of giving a talk on “cross-examination in the LVT – what should managing agents know?” So, helpful advice on de-railing leaseholder questioning. LKP has publicly stated its view, also expressed in a letter to Mark Prisk, that this presentation was inappropriate for an event hosted by a taxpayer-funded organisation set up to aid leaseholders.

Bates was part of the legal team representing the freeholder in the Oakland Court case in Sir Peter’s Worthing constituency. The MP described in the Commons the stratagems used against the pensioner leaseholders as “legal torture”.

Bates is also fighting the right to manage applications of two retirement sites in Plymouth, in a case which is being closely followed by both Sir Peter and Mark Prisk.

In contrast, those who were assiduous in their attendance were the two leaseholder civil servants responsible for leasehold policy at the Department of Communities and Local Government. They attended the conference from beginning to end yesterday.

It turned out to be a long day. After the paid–for professional conference, LEASE introduced the novelty of inviting leaseholders to its annual conference with a free evening event, which lasted until 9pm.

Around 300 attended, bringing with them assorted leasehold problems – or airing at length perceived injustices – which were addressed with varying degrees of success by lawyers and leasehold experts (of which more later).

To sum up: LEASE’s annual conference this year actually began to resemble an annual conference. It was a far more serious engagement with the bitter disputes and conflicts that beset leasehold than LEASE has staged in the past.

There remain concerns. LEASE’s monetising initiatives with the commercial and professional interests sit uneasily with what Parliament envisaged as its primary purpose of helping ordinary leaseholders.

But at least this year there was no repeat of the, frankly disgraceful, presentation on how to load insurance commissions and keep them secret from leaseholders which was a feature of the 2010 event.

Here are some of the 2013 highlights:

In his video address, Housing Minister Mark Prisk said that statutory regulation of managing agents was not government policy. But he talked up the initiative of making all managing agents join Ombudsman schemes.

“I do not believe that most [managing agents] provide a bad service but it is clear that some do not come up to scratch. We are determined to do something about that.”

Sir Peter Bottomley warned the sector that it was under close scrutiny, and that rogue freeholders and their managing agents are going to be named.

“MPs are aware of the problems,” he said. “They have read LKP and they know about the case involving Dennis Jackson at Plantation Wharf.

“MPs lag a year and a half behind these things, and the media by six months. By the time you start putting things right, they will have their teeth into you.”

Reputations can rise and fall very quickly, said Sir Peter, who drew comparison with Google: a year ago most would have thought of it as a brilliant internet search company; now, they would think about tax.

He issued a stern warning to freeholders sitting on assets that have been pledged to banks at triple their real values who have also remorselessly monetized their sites.

“The amount of publicity heading their way is going to be huge,” he said.

Siobhan McGrath, President of the Residential Property Tribunal Service, outlined the changes to the LVT system.

From July 1 the LVT will become the new First-tier Tribunal (Property Chamber). LKP will explain this in detail in a separate article.

On prompting from both Sir Peter Bottomley and LKP, McGrath agreed that the publication of the LVT decisions on the Ministry of Justice website must be improved.

It is hugely frustrating that useful LVT rulings are haphazardly reproduced on the Ministry of Justice website. Most are just pdf photocopies of the rulings. Some are missing, or are impossible to find.

This is the latest billion pound Qatari investment in London property but the site is going to be build-to-let to tenants on three-year leases.

Peace, who is the most powerful woman in British property, has been talking up build-to-let for 10 years and here is a massive scheme that will realize this idea.

If build-to-let does attract massive institutional investment, then it is obvious that current inadequate leasehold protections need to be overhauled.

Keith Hill, the new ARMA-Q regulator, introduced his scheme but emphasised that it was no substitute for statutory regulation.

“This is a sector with a lot of laws and little regulation. Conventional wisdom would have it that ARMA would be opposed to regulation [of managing agents].

“Yet ARMA supports a statutory regulatory regime with statutory penalties. I think that reflects very well on ARMA and its membership.”

Rob Plumb, chief executive of HML Holdings, a member of ARMA and of LKP, made the point that the regulator would not be regulating rogue freeholders, who employ the managing agents.

This was a point made in another context, by Ian Fletcher, head of residential at the British Property Federation: the people absent from the LEASE professional conference were the housebuilders who draw up leases and the freeholders who buy them.

A decent-ish managing agent can be led down the path of darkness by a bandit freeholder (of which, as LKP readers are aware, there is an abundance).

Professor James Driscoll, who is one of the leading authorities on leasehold law, gave an interesting resume of leasehold law over the past 30 years.

He posed the question: if leasehold law did not exist, is this really how we would regulate the ownership and management of residential property?

His own preference was for a commonhold system, and he did not doubt that it would happen at some point as the English become more used to living in flats.

A sunset clause for commonhold – a set date when it would be mandatory – was discussed during the Commonhold and Leasehold Reform Act 2002 discussions, but fell by the wayside.

Westbrook Dolphin Square v Friends Life is “not a leasehold dispute at all. This is a commercial dispute using leasehold law.”

Damian Greenish, a Chelsea-based solicitor who chaired both conferences, later agreed with this, saying “you are seeing wised up people who have the aim of enfranchising for commercial gain”.

It is not an issue we have covered at LKP, but should probably do so.

One of the most successful sessions of the conference was held by Nicholas Kissin, a solicitor and senior advisor at LEASE.

In a Socratic dialogue with the audience, he proposed a leasehold problem and then invited the audience to suggest how they would resolve this.

The result was a succession of high quality, and widely differing, suggestions that would be fascinating for many leaseholders.

One hopes the results, or something similar, will be accessible on YouTube.

At the evening event for leaseholders, Gerry Proctor, MBE, director of Engage Liverpool talked about how his extraordinary organization of leaseholders arrange affairs in the city.

It seems extraordinarily harmonious and has provided massive social benefit. Only one case has gone to LVT, with no lawyers employed “because Liverpool does not go in for expensive lawyers”.

A possible explanation for why Liverpool differs from the rest of the country is that the capital values have plummeted even more than say Leeds or Nottingham, and the city centre revival of Liverpool hangs by a thread. If all do not work together for the greater good, it will be a massive step backwards.

But it is an inspiring story, and one completely ignored in the wider media.

LKP has asked Gerry for his complete presentation.

James Naylor, a solicitor at Crabtree Property Law, gave a presentation on “the responsibilities and liabilities of directors of management and right to manage companies” – hindered by some rude interruptions by leaseholders wanting to air their own grievances.

It was a very useful guide, for those who cared to listen, and we will reproduce it on LKP.

Finally, Deep Sagar, the chairman of LEASE, ended the day asking for feedback.

Our view was this: the conference was a vast improvement.

It is the most intellectually robust discussion of leasehold issues.

It should be a permanent feature of LEASE to involve leaseholders at its annual conference.

We remain wary of LEASE organising fund-raising initiatives with the commercial interests in leasehold.

And we will be strongly critical of any return to presentations that advise freeholders and managing agents how to rip off leaseholders over insurance; or how to trip them up in the courts etc.

These should not be hosted by a taxpayer-funded organisation.

We look forward to further engagement with LEASE for the common good, and congratulate it and News on the Block for organising this event.

Pravda alive and well at LEASE, ARMA and Peverel … who ALL support the OFT inquiry into leasehold fiddling