LEASE, the Leasehold Advisory Service, is a taxpayer-funded quango, so why on earth is it asking solicitors and others whether they would be prepared to pay referral fees to be put in touch with the distressed ordinary leaseholders who call up for advice?

Referral fees – or ‘bungs’ as they are less politely termed – are rife in the property world, but it is astonishing that a government agency considered accepting them.

LEASE says it does not accept referral fees, nor will it do so in the future.

Had it done so, LEASE would have been handing over leaseholders with serious legal or other problems to solicitors, managing agents, surveyors etc not because these firms have any particular merit, but because they had made a payment to the advisory service.

The evidence that LEASE was considering referral fees comes in the form of an emailed survey following the lavish ‘annual conference’ the quango held at a Mayfair hotel on May 15. 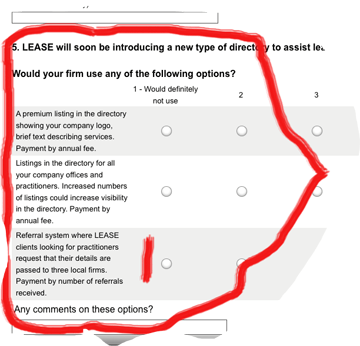 This was, in fact, a very expensive trade fair filled with representatives from RICS, ARMA, large-scale managing agents, landlords, solicitors and barristers.

As a monetising exercise for LEASE it was certainly effective. The cost was £310 a head, so with 200 attendees that was a handsome £62,000 windfall (although there were discounts for group bookings, and some were admitted at no charge, such as LKP, for example).

One of the very few ordinary leaseholders present was Julian Shersby, from Surrey, who had lost £44,000 fighting his landlord in LVTs. At the end of the day-long conference, he grabbed the microphone and poured scorn on those who were present.

“There are lawyers here who won’t even speak to me because I cannot afford their fees,” he said.

“LEASE is failing to fulfill its parliamentary mandate by excluding leaseholders. It should be even-handed and defending their interests. Instead, it has organized an event purely to the benefit of landlords.”

After the event “leaseholder professionals” – the term used to describe those who  profit from the leasehold world – were circulated the emailed survey, one of whom leaked it to LKP.

Under a section headed “Would your firm use any of the following options?”, leasehold professionals were asked whether they would pay for a “premium listing” in the LEASE directory, highlighting contact details.

It then asked whether they would be prepared to pay a bung using a:

“Referral system where LEASE clients looking for practitioners request that their details are passed to three local firms. Payment by number of referrals received.”

Nonetheless, the selection of the professional service would have been based on whether or not it paid money to LEASE, not on whether it is any good.

“The survey to professionals posed potential scenarios, as did a similar survey sent to leaseholders.

“Nothing put forward in either survey is a commitment to future action; but you will appreciate that any organisation, in looking to address the needs of its customers, should pose these sorts of questions from time to time.”

There is an epidemic of referral fees in residential property, and they result in poisonous suspicion and ill-feeling.

ARMA’s annual conference this autumn is being sponsored by an outfit called Energy Renewals, which is prepared to pay managing agents incentive payments of up to £250,000 in order to place the energy contracts.

These are inducements to spend other people’s money, similar to freeholders of flats benefiting from insurance commissions.

In estate agency referral fees are widespread. Throughout the country there are solicitors and surveyors paying huge referral fees to get the conveyancing and surveying work.  (More here)

It is no exaggeration to say that some solicitors live in terror of being removed from an estate agency chain’s conveyancing panel and are sacrificing up to half their conveyancing fees in order to be kept in work.

The Law Society has agonised on the subject, and the Legal Services Board has investigated.

But the interests of the big factory conveyancing firms have prevailed and referral fees are still legal, so long as customers (that is, house buyers) are aware they exist.

At the top end of the market, above say £750,000, referral fees are unlikely to be much more than a nice lunch or case of wine: at that level estate agents are making enough on the sale without needing to cream off on the conveyancing as well.

The LEASE survey can be read in full here:

LEASE under pressure to raise cash through paid-for services