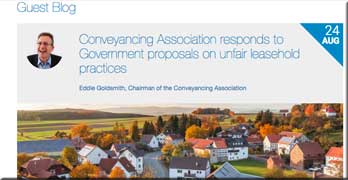 The Conveyancing Association says it is going to deliver a “full and frank” response to Sajid Javid’s consultation on the leasehold sector.

“It’s clear that we want to move away from leasehold being used purely as a motive to generate income, and produce ever-increasing profits for whoever might own the freehold,” writes Eddie Goldsmith, the Conveyancing Association chairman.

Commonhold, which has been on the statute book since 2002, needs to be reviewed “with a view to it replacing all leasehold with a working commonhold proposition, rather than a simple watering down of leasehold that some are already calling ‘fleecehold’.”

“At the moment, with Commonhold, we are simply unsure whether it will work or not because developers don’t use it – the reason being there is no value retained for the developer from it, and that perhaps tells you why there are only 175 commonholds in England.”

The Government’s open consultation on leasehold, entitled ‘Tackling unfair practices in the leasehold market’, has only a month to run …

LKP raised the issue of successful commonhold citing the example of Spire View in Pickering, in North Yorkshire – that is if examples in the rest of the world (including Scotland) are insufficient.

Spire View featured in the Sunday Times in an article by LKP trustee Sebastian O’Kelly in July:

“If commonhold isn’t deemed an adequate solution and the Government persists with leasehold then it’s our view that we should require some substantial improvements. For example, leasehold should only be applicable where there are genuine shared amenities, the term of the lease should be 999 years with peppercorn ground rent, and all administration fees must be based on a reasonable fee tariff with access to a redress scheme if the lease administrator attempts to charge unreasonable fees or does not respond within five working days of a request,” Mr Goldsmith writes.

The Conveyancing Association has been a robust critic of the fee-mongering, complexities and delays involved in transacting leasehold properties.

Leasehold sales are bedevilled with ‘extortionate’ charges and game-playing, says the Conveyancing Association