Donate
You are here: Home / Latest News / Leaseholder and judge Suki Johal wins war over her patio that has cost £250,000 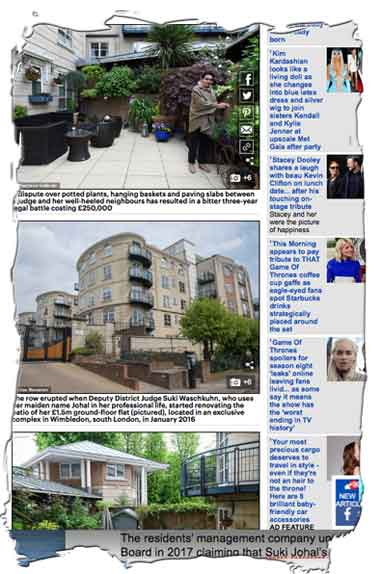 Suki Johal, a deputy district judge, has won a three-year battle over her potted plants, hanging baskets and paving on the patio of her £1.5 million flat in Wimbledon, south west London.

The landlord, a leaseholders’ controlled residents management company, argued that Suki Johal, 51, was in breach of lease for the patio and had not obtained permission.

It was argued that the hanging baskets were also a health and safety hazard, according to MailOnline which carried the story.

“During a hearing at Central London County Court in December 2018 she [Suki Johal] was cleared of any wrong doing and given the right to keep her £50,000 patio, which measures 42 feet by 22 feet.

Judge at war with her neighbours over PAVING SLABS at her £1.5m flat

Dispute over potted plants, hanging baskets and paving slabs between a judge and her neighbours has gone on since 2016 Row erupted when Deputy District Judge Suki Waschkuhn, who uses her maiden name Johal in her professional life, started renovating the patio at her flat She was ordered to halt

“The case was listed for five days but lasted only two. Judge Alan Johns QC ordered the company to pay half of her costs as well as their own, with the total legal bill amounting to £250,000.”

But Ms Johal has issued fresh proceedings demanding £500,000 from the directors of the management company. She claims the dispute has caused her depression, for which she required counselling and medication, and damaged her professional reputation.

‘I’m not going to let the matter rest. I’ve got my patio but these people have made my life hell over trivial matters. I’ve got considerable financial resources and legal knowledge so they’ve chosen the wrong person to mess with.

‘This whole incident has drained me and has had a terrible impact on my mental and physical health. For weeks I could not sleep as I fought to save my patio.

‘The patio is my oasis, my escape after a stressful day because I do a very demanding job but these people tried to take it away from me.’

The residents’ management company unsuccessfully complained to the Bar Standards Board in 2017 claiming that Suki Johal’s emails to them amounted to harassment.

She claims she spent £100,000 fighting this complaint, which forms part of her damages claim.

The 104 leaseholders have had to pay £2,000 each to deal with the legal costs of the dispute – so far – and Suki Johal has also had to contribute.

Ms John is married to Wolf Waschkuhn, and the couple own houses in Switzerland and Italy as well as the flat in Wimbledon, according to MailOnline.

“I fought and won the battle for my patio, now I’m going to fight for my name and get justice for what they did to me. This whole thing has been very costly and I don’t see why I should pay for it.’

In his judgment on the patio issue, Judge Johns said that Ms Johal’s failure to allow an inspection of it had prompted ‘something of a war’. The whole matter could have been averted.

For those, like the Leasehold Knowledge Partnership, who advocate leaseholder empowerment and the end of third-party commercial landlordism in residential property, this case of middle class neighbours at war is pretty lowering.

From Tokyo, leaseholder wins back £100 ground rent at Maltings Court

Steve Norris, of Soho Estates, has skin in the game when he opposes commonhold
Next Post: Bob Blackman gets Theresa May to commit to ‘peppercorn’ ground rents … Let’s hope she knows what it means