Donate
You are here: Home / News / Competition and Markets Authority / OFT / LKP gets full investigation into leasehold management by the Office of Fair Trading 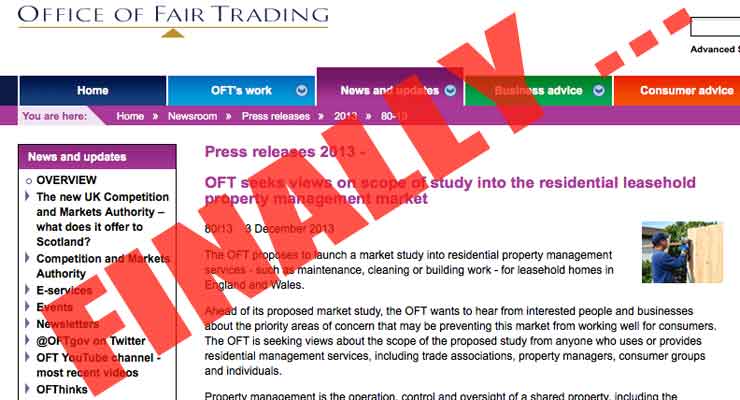 The Office of Fair Trading today announced a full investigation into leasehold in England and Wales.

The announcement has been prompted by the campaigning of the Leasehold Knowledge Partnership and its sister website Campaign against retirement leasehold exploitation (www.betterretirementhousing.com), the Campaign Against Retirement Leasehold Exploitation.

In September LKP / Campaign against retirement leasehold exploitation involved prime minister David Cameron in the issue of the protracted OFT investigation into Peverel’s price-fixing scandal involving Cirrus. Pensioners were cheated after Peverel – which admits the practice and turned itself in – orchestrated a bogus tendering process for warden call services and electronic door entry systems.

A meeting resulted between the OFT and LKP / Campaign against retirement leasehold exploitation, backed up by Sir Peter Bottomley and Energy Secretary Ed Davey.

The OFT will be announcing the conclusion of its investigation into the Peverel price-fixing scandal on Friday.

But today it has announced a further investigation into the entire leasehold market in England and Wales – the only two countries in the world with this form of residential property tenure.

Sebastian O’Kelly, director of LKP said: “At last, officialdom is waking up to the monetising abuses in leasehold, ranging from small-scale Rachmans to huge corporate players.

“The amounts of money involved are staggering, and vast sums of money have been borrowed against dubious leasehold revenue streams from taxpayer-owned banks.

“Abuses in leasehold cross class boundaries: every single prime riverside site in London has been affected, as well as retirement flats often worth no more than £50,000. LKP has been contacted by flat owners at The Knightsbridge (£3m each) and retirement flats in St Helens.

“While the OFT is at last doing something, the same cannot be said for the complacent property tribunals, which have tolerated freeholders’ expensive lawyers playing the system, and the Department of Communities and Local Government, which until very recently was determined to ignore the evidence of widespread sharp practice.”

The decision to launch a full inquiry into leasehold management has been assisted by well-researched reports such as the CentreForum’s ‘A new lease of life’  published in July 2012.

As a new generation of homebuyers lives in flats, rather than freehold houses, the issue will only get worse.

As Sir Peter Bottomley made clear at a meeting of leaseholders in London on Nov 12: the abuses and cheating endemic to leasehold can only take place with the assistance of professionals: lawyers, surveyors, accountants, auditors.

“I predict ruined reputations in this sector and criminal proceedings,” said Sir Peter. “What is going on in leasehold is nothing short of a scandal.

“Every professional standards body – for lawyers, bankers, surveyors and accountants – should be investigating whether their members have been behaving wrongly, unprofessionally, unfairly or criminally

“You cannot have the level of bad behaviour that we have seen with the professional standards bodies all looking the other way.”

Ed Davey, the Energy Secretary and MP for Surbiton and Kingston, said: “I am very pleased the OFT has taken up our request to investigate the leasehold sector.

“I have been campaigning alongside Campaign against retirement leasehold exploitation on this issue for a number of years.

“Since hosting a meeting in the House of Commons in 2009, it has always concerned me that some freeholders and managing agents are in an unfair position to exploit leaseholders and particularly those in the retirement sector.

“Sir Peter Bottomley MP and myself met the OFT Chief executive, Clive Maxwell, last September where we again urged him to consider this investigation. I am pleased the OFT has now moved forward with that commitment.”

Martin Boyd, joint LKP / Campaign against retirement leasehold exploitation director and chairman of Charter Quay residents’ association, said: “This OFT inquiry is important because it is the first time that there has been a fundamental  review of the leasehold sector.

“It is inevitably going to expose unfairness that may well lead to primary legislation.”

The LKP / Campaign against retirement leasehold exploitation has been exposing the appalling practices in leasehold, mounting investigations and examining closely the land tribunal rulings – which are too unexciting for the mainstream press.

On four occasions it has faced libel threats – and one vague legal threat came, disgracefully, from the leadership of the Leasehold Advisory Service – but has not altered or removed any article from the website.

As millions of Britons move to being flat owners rather than house owners, it is essential that the scope for cheating them is drastically reduced.

Ideally, LKP / Campaign against retirement leasehold exploitation would like to see commonhold being introduced, where flat owners all own a fraction of the freehold. This applies in the rest of the world.

Or, developments could be built with a residents’ management company in the lease, meaning that the residents control the building.

At present, developers bulk up the value of the freehold with sneaky revenue-generating leases; easily get round the law that freeholds must be offered to leaseholders before sale; and then sell it off to some shark in an auction.

The scale of the abuses being unearthed by LKP / Campaign against retirement leasehold exploitation is staggering.

It is excellent that the OFT has announced this investigation.

Some in leasehold sector declined to co-operate with mis-selling investigation, says CMA

OFT will report on the Peverel / Cirrus price-fixing scandal on Friday
Next Post: Freeholder’s barrister Justin Bates named in Parliament yesterday. And Benjamin Mire. And Tchenguiz. And Yianis. And Israel Moskovitz …