Donate
You are here: Home / News / FirstPort / Campaign against Residential Leasehold Exploitation whistleblowers were THREATENED with prosecution if they went public over OFT’s toothless £500k investigation into Peverel-Cirrus 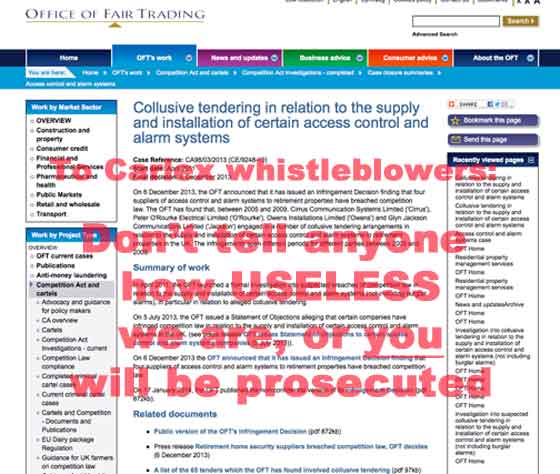 The three Campaign against Residential Leasehold Exploitation whistleblowers of the Peverel-Cirrus scam were threatened with prosecution by the Office of Fair Trading  if they revealed the investigation.

The threat was minuted by the OFT on September 27 2012 even though it had already decided to give Peverel leniency and not take any action.

In a blatant example of shooting the messenger, the OFT  threated to prosecute three whistleblowers in case they …  er, compromised a prosecution that the OFT already knew would not happen.

The threat of criminal proceedings against the Campaign against Residential Leasehold Exploitation whistleblowers was revealed yesterday by the OFT, which also admitted that it had recovered a pathetic £1,777 in fines from a stooge company in on Peverel’s fiddle. Other outfits involved in Peverel’s scam have ceased trading.

Throughout its pointless £500,000 investigation, the OFT urged the whistleblowers not to go to the press, but they were kept in the dark about the OFT’s leniency deal with Peverel.

They only learned that the OFT was going to do nothing at all in July 2013 when the OFT’s “statement of objections” outlining the inquiry were published.

The fact that the whistleblowers were threatened with prosecution was revealed yesterday in an email from OFT director Andrew Groves to Susan Wood, one of the three.

The letter is reproduced below.

The OFT is to be wound up at the end of this month.

Campaign against Residential Leasehold Exploitation urges anyone reporting serious issues to officials at the OFT or its successors only to do so through them or, Sir Peter Bottomley or Ed Davey, the Energy Secretary, and LibDem MP for Kingston and Surbiton.

It is vital that substantive issues concerning the current investigation into leasehold management are copied to these MPs and recorded.

The tiresome “cleverness” displayed by the OFT over the Cirrus inquiry erodes trust in our protective institutions.

They were strung along for years to co-operate with an investigation where it was already decided to offer leniency, and they were not informed.

Then they were threatened with criminal prosecution if they tried to interest any outsiders in the injustice of the Peverel-Cirrus price-fixing.

Thank you for your email of earlier today. I address each of the issues you raise in turn:

Please follow the link, under ‘Related Documents’, to ‘Public version of the OFT’s Infringement Decision’

I very much hope the information provided above is useful and I do genuinely understand why the issues arising from this investigation are both frustrating and unsatisfactory to you.