Donate
You are here: Home / Press / Mail on Sunday urges right to manage or buy the freehold 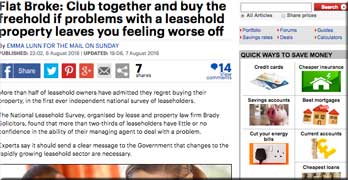 The Mail on Sunday personal finance section went over the issue of leaseholders exercising right to manage and buying the freehold yesterday.

The article can be read here

It referenced the LEASE survey that found that 57 per cent of leaseholders regretted buying their property. This is a figure quite unprecedented in other jurisdictions where commonhold flat ownership is routine.

The MoS reported that 43 per cent of new build registrations last year were leasehold, compared with just 22 per cent in 1996.

LKP is responsible for changing the ludicrous official government figure of private leasehold flats of 2.5 million – which was unquestioned for years – to 4.1 million.

This is still a conservative estimate, and we believe leasehold properties have doubled since 1997.

The Conveyancing Association pointed out last week that leasehold transactions across all UK regions have risen to 260,000 in 2015 up from 220,000 in 2011 (Source: Land Registry). It also said 57% of all transactions in Greater London and 40% in the North West are for leasehold properties. [The London figure seems low to LKP: in central London 96 per cent of new property is leasehold.)

MoS pointed out that freeholders receive no compensation if leaseholders opt for right to manage.

But – in theory – they have suffered no loss whatsoever. The only legitimate incomes that come with freeholds are ground rent, lease extensions and the development potential of a site.

Freeholders are not supposed to be profiting from the management of the site or dubious commissions for various services.

MoS also references a firm of solicitors charging £500 for RTM. That might be the case for a house in central London converted into three flats.

If the issue is heading for tribunal, it will cost more, and here it is essential that RTM directors have the option of hitting the breaks and starting another application if there are any flaws of significant changes (ie leaseholders have moved out or even died).

As we have pointed out many times, there is a cottage industry of lawyers employed in stuffing RTM, taking the most trivial defects in the application to the property tribunal.

Unfortunately, the property tribunal, especially in London, has far too accommodating to this nonsense.

MPs and regulators should be asking: why, if all the income streams are legitimate, are freeholders resisting right to manage?

In our experience, only the more enthusiastic monetisers resist RTM to the last.

It references a block of seven flats in Pimlico, central London, with 999 year leases which bought the freehold for £60,000.

At such a knockdown price, it is astonishing the leaseholders had not bought it years ago.

After all, if there is an attic space to convert into a £2 million penthouse, the leaseholders might as well do that themselves and have a service charge holiday for life, rather than give the benefit to some scamp who likely as not picked up the freehold with a bundle of others at auction.

Mail on Sunday today: Leasehold is becoming an election issue