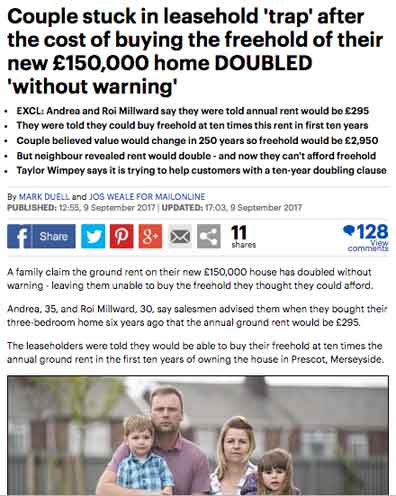 MailOnline features a couple who bought a £150,000 house off Taylor Wimpey who were promised the freehold at ten times the £295 annual ground rent.

But now the price has soared and Andrea, 35, and Roi Millward, 30, at Speakman Gardens, Prescot, Merseyside, cannot afford the freehold.

Evidence provided by MailOnline indicates an error may have been made. A hand written form completed by Taylor Wimpey salesmen says the “ground rent, leasehold period & charges if applicable” changes every 250 years.

In fact, the ground rent has the usual terms of doubling every ten years on five occasions after purchase.

Now ground rents have doubled for the first time to £590, the freehold is out of their reach.

EXCL: Andrea and Roi Millward say they were told annual rent would be £295 They were told they could buy freehold at ten times this rent in first ten years Couple believed value would change in 250 years so freehold would be £2,950 But neighbour revealed rent would double – and now they can’t afford freehold Taylor Wimpey says it is trying to help customers with a ten-year doubling clause A family claim the ground rent on their new £150,000 house has doubled without warning – leaving them unable to buy the freehold they thought they could afford.

All the speculators in Adriatic Land hide their beneficial ownership behind nominee directors of the Sanne Group, headquartered in Jersey.

The conveyancing was done by law firm Bannister Preston.

The Millwards discovered after a Land Registry check that their land was sold to Adriatic Land in November 2012, just over a year after they moved in.

Andrea tells MailOnline: “I do feel quite angry with the salespeople. If we’d have known about all this then we wouldn’t have bought it. As a first-time buyer you trust them though.”

“Taylor Wimpey should have explained in black and white and told us the ground could be sold from under our feet. We had their help-to-buy scheme too, they have reeled us in with that as well.

But Mrs Millward believed the reservation document stating the £295 ground rent would be unchanged for 250 years is proof that she was misled.

The article is unusual in reproducing the documents to support its narrative.

There are other points of interest.

The Conveyancing Association is committing itself to support for commonhold as an alternative to leasehold.

“We would like the Government, for instance, to embrace Commonhold where there is no financial incentive, no diminishing term on a lease and all services can be provided with no escalating ground rents.”

The HomeOwners’ Alliance suggest a case against the conveyancing solicitors in this case, but if the errors of the Taylor Wimpey sales staff are substantiated, there may be a claim against the developer.

“There is overwhelming evidence that buyers of leasehold houses were informed by developers that they could buy the freehold at a moderate price after the statutory two years of occupancy.

“Again and again, the developers have then promptly sold the freeholds on to anonymous investors who hide their beneficial ownership behind nominee directors. Some of these owners are offshore in tax havens.

“When the owners learn that the freehold has been sold – there is no obligation on the part of the developer to inform them – they then find that the price of the freehold is prohibitive.

“This is a total scam perpetrated on their customers by plc housebuilders.

“It is appalling that taxpayers have also been conned: we all subsidise first time buyers’ mortgages through the Help To Buy scheme, only to find that developers cheat the buyers.

“People are trying to buy homes, which developers have turned into a highly complex investment asset class benefiting murky and secretive individuals.”

Marie Rimmer MP: how can a modest Taylor Wimpey leasehold house in St Helens pay out £185,850 to freehold investors over 60 years?

BetterRetirementHousing.com reports retirement resale disasters. On BBCR4 MoneyBox today
Next Post: Sector foxes warn that changing leasehold will be ‘dangerous’. But for whom?