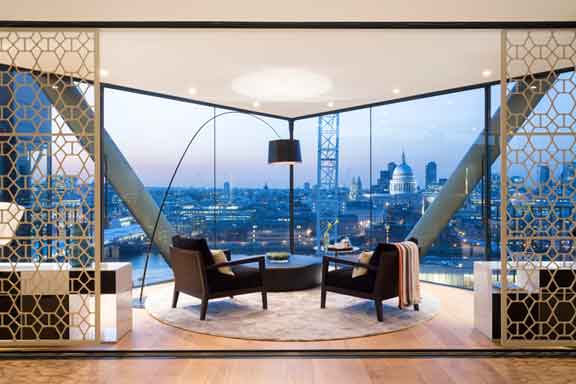 Leaseholders at the upscale Neo Bankside beside Tate Modern on the south bank of the Thames have lost their battle for privacy against the art gallery.

The Tate created a viewing gallery for the public so they could enjoy magnificent views across the river to St Pauls.

Unfortunately for the residents, the viewing platform also extended to the back of the gallery, allowing ideal gawping opportunities for the public to look into the flat owners’ homes.

This week they lost their court battle against the gallery, whose former director initially suggested the residents buy some net curtains.

Residents in glass-walled apartments worth up to £3.5m have lost their bid to stop visitors to the Tate Modern gallery looking into their homes. The owners of four flats in the Neo Bankside development on London’s South Bank claim the neighbouring gallery’s viewing platform caused a “relentless” invasion of their privacy.

The issue has caused a degree of schadenfreude among the unaffected, with little sympathy for the well heeled residents, whose homes at that level in the building cost around £5 million. The more expensive £8 million penthouses, with some of the best views in London, are higher up and unaffected.

LKP has had some dealings with the leaseholders at Neo Bankside, a site built by Native Land and the Grovesnor Estate of the Duke of Westminster, with collaboration of the Duke of Buccleuch’s estate as well.

Residents considering legal action after gallery visitors can see into homes The luxury homes at the Neo Bankside complex can cost up to £19million The Tate has asked its 10,000 visitors to respect its neighbours’ privacy after some have posted pictures of the properties interiors on social media When you have just spent millions on a new luxury apartment, the very least you might expect is a modicum of privacy.

The residents’ management company was a leasehold stitch-up, with the developers’ two initial directors having 100 votes each. There are only 217 flats at the site.

As happens so often in the leasehold world, shyness set in when LKP made disobliging inquiries and the RMC is now under the control of the leaseholders who, of course, have the overwhelming financial stake in the building.

In the High Court on Tuesday, Mr Justice Mann said the claimants have “submitted themselves to a sensitivity to privacy” due to the extensive use of glass walls in their properties.

He added: “These properties are impressive, and no doubt there are great advantages to be enjoyed in such extensive glassed views, but that in effect comes at a price in terms of privacy.”

The five claimants had been battling the gallery since the viewing platform opened in 2016.

Visitors are offered “360 degree views of London” from an enclosed walkway around all four sides of the Tate Modern’s South Bank building.

The claimants had sought an injunction requiring the gallery to “cordon off” parts of the platform or “erect screening”.

Sebastian O’Kelly, LKP chief executive, said: “Most public comments on this issue have shown little sympathy for the residents, who have also been caricatured as rich, foreign and over here.

“Of course, most of those making these comments would bawl their heads off if something similarly intrusive were dumped on them.”

How scam values on equity release loans affect leaseholders. And YOU need to stop it …

Taxpayer boost for offshore speculators as Help To Buy lands 17,000 home buyers in leasehold
Next Post: Leaseholders and the sector react to Law Commission reforms to commonhold and right to manage