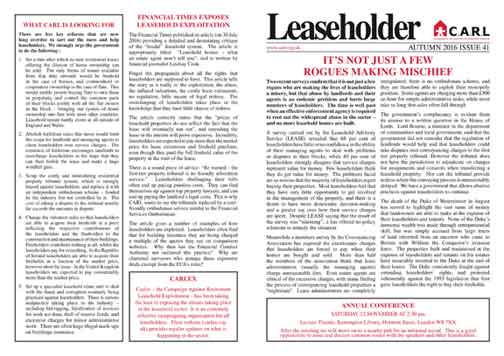 It is with regret that we announce the death of leasehold campaigner Nigel Wilkins, who for many years ran CARL: the Campaign for the Abolition of Residential Leasehold.

He died in the Chelsea and Westminster hospital on February 25 aged 66.

Nigel, a resident in South Kensington, in London, was an important activist and Labour party supporter who drove forward the agenda for leasehold reform from the 1990s onwards.

He worked closely with fellow activist Joan South, who is still recalled by some leasehold sector professionals of that time.

Their work contributed to the 2002 Commonhold and Leasehold Reform Act, although Nigel never believed this flawed legislation was the final answer to residential leasehold, which he wanted abolished.

However, it did introduce commonhold as an alternative on the statute book. It is a standing reproach to legislators – and civil servants who have minimised the issues of leasehold for years – that matters in residential leasehold are not right.

Nigel believed that commonhold should be mandatory, which would have prevented the repeated scandals reported on this website.

He was appalled by developers loading residential leases with lucrative income streams, and the sale of freeholds to anonymous investors often based offshore. Indeed, offshore finance, accountancy fraud and banking were his areas of professional expertise.

He was an active supporter of the Labour party in Kensington – evidence in itself of an optimistic and determined mindset – and stood unsuccessfully as a local councillor.

The newsletters of CARL, published in printed form, were always very well written and researched, and I would receive them regularly in my time as a property editor on a national newspaper.

He was delighted to witness Parliament – at last – debating leasehold again. The last time we met was at the House of Commons on December 20 last year for the leasehold debate, which was prompted by LKP patrons Jim Fitzpatrick and Sir Peter Bottomley.

He could also provide excellent insights into leasehold’s many absurdities, rightly seeing it as a form of residential tenure that continues only because investors and developers make so much money out of it.

I was struck by his observation that a mortgage fraudster, a Mr Waya, was treated more leniently by the criminal courts, which sequestered his leasehold assets, than ordinary, non-criminal leaseholders are by the civil courts in forfeiture cases.

The criminal courts sent Mr Waya to prison, but scrupulously returned to him his seed capital that set him on the way fraudulently to buy other properties.

Nigel pointed out: “So leaseholders are being treated far worse than criminals when it comes to forfeiture. Moreover any debts due are purely civil debts, and not a result of theft.

“As we all know a large proportion of the “debts” owed by leaseholders arise because of theft and incompetence by landlords, managing agents and others – the so-called “professionals”.”

Nigel died suddenly at the age of 66 on February 25, after a cold resulted in lung infection and heart failure.

There will be a memorial celebration of his life at Kensington on May 6. More details from Charlotte Martin cvmartin@btinternet.com

Leasehold forfeiture: why is LEASE so pathetic over this, too?