Donate
You are here: Home / News / One in the Eye from LKP 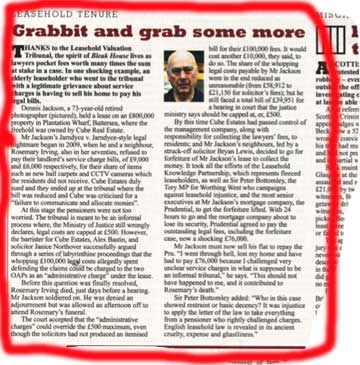 This week’s issue of Private Eye, the satirical magazine,  has reported the Dennis Jackson forfeiture case, in which Leasehold Knowledge Partnership has been involved for the past six months.

Headed “Grabbit and grab some more”, the article compares Jackson’s travails through the courts with the never-ending Jarndyce v. Jarndyce in Bleak House.

The main point is that a relatively minor dispute escalated into one where Jackson came within a hair’s breadth of losing everything he has as a result of forfeiture. This was granted on January 30 and lifted in a session of Wandsworth County Court, from which the public were excluded, on February 26 – the day  before the forfeiture order became absolute.

The article quoted Sir Peter Bottomley, MP for Worthing West, who has an interest in leaseholder injustices, saying: “Who in this case showed restraint or basic decency? It was injustice to apply the letter of the law to take everything from a pensioner who rightly challenged charges.

“English leasehold law is revealed in its ancient cruelty, expense and ghastliness.”

Dennis Jackson at Plantation Wharf: An £800,000 forfeiture over-turned by LKP