UPDATE APRIL 5, 17.51: In a statement justifying its policy, Anchor refers to the Office of Fair Trading report which stated that “terms in long leases preventing sub-letting have potential for unfairness” and that “permission [to sub-let] should not be unreasonably withheld”.  See below

A curious dispute is brewing at our sister site Campaign against retirement leasehold exploitation over retirement developments owned and managed by the Anchor Trust housing association.

It has decided to allow sub-letting at these sites even where this is specifically not permitted in the lease. It says it is doing so because retirement flats are proving difficult to sell and sub-letting will relieve the costs on retirement leaseholders, or their heirs, who otherwise would have to pay full service charges on empty flats.

But Anchor’s top-down dictat allowing what in law is not allowed has infuriated residents at Anchor sites and at least three are now in ferment.

At a packed meeting yesterday at Woodville Grove, at Welling in Kent – on the outskirts of London – residents told Anchor executives of their furious opposition to the proposal

“There were bums on seats that have never been on seats at other meetings before,” said resident Barbara Little, 63, who is leading the opposition to Anchor’s new policy at the site.

Little is furious that Anchor is allowing sub-letting and – far more importantly – unilaterally ignoring the lease.

“We bought these properties on the clear understanding in the lease that sub-letting would not be allowed, and they are blatantly ignoring this.

“But if they can ride roughshod over this, what else will they do? The lease has to be a legal document or it is absolutely worthless. 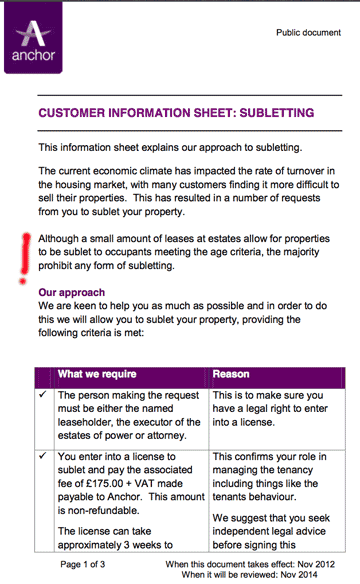 “When I did some alterations work in my flat I had to pay Anchor £60 because this was a condition of the lease. Why should I pay this if we are just making things up as we go along?”

Abigail Poole told the residents that the policy meant “relaxing the rules on that clause of the lease”. But Anchor’s own leaflet to its residents makes it clear this this is a far more major step.

“Although a small amount of leases at estates allow for properties to be sublet to occupants meeting the age criteria, the majority prohibit any form of sub-letting,” it says.

Poole told the Woodville Grove residents that Anchor had been deluged by requests to relax sub-letting restrictions by leaseholders or their heirs who were unable to sell. On further questioning it appeared that nine out of 9,000 Anchor residents had actually requested this.

In December residents at grade II listed Bicester House in Oxfordshire also overwhelmingly rejected Anchor’s change of policy. The issue is now to be adjudicated by the Housing Ombudsman.

“I have asked them to investigate the fact that despite all Anchor’s assurances that a consultation process would take place, it hasn’t and has ignored their own policies,” said Stuart Barsby, a former senior police officer and chairman of the Bicester House residents’ association. Here 37 residents voted against Anchor’s policy and only four were in favour.

At the Hyett Orchard site in Painswick, Gloucestershire, 85 per cent of residents are opposed to sub-letting, according to Roger Teague. In October 2011, district manager Sue Clark assured the residents that no property would be sub-let, but the policy is going ahead.

As with Bicester House, the residents are going through the Anchor redress scheme which concludes with the matter being considered – in a non-disclosed and non-binding ruling – by the Housing Ombudsman.

“Anchor’s actions have destroyed the ethos of this estate and has caused needless unpleasantness and disharmony,” said Teague.

Anchor Trust is allowing leaseholders, or their executors, to rent the properties in exchange for a fee of £175 plus VAT. This is more than double the £85 sub-letting fee at retirement developments agreed between the Tchenguiz Family Trust and the Office of Fair Trading, while the Land Tribunal has ruled that £40 plus VAT is reasonable in the non-retirement sector. 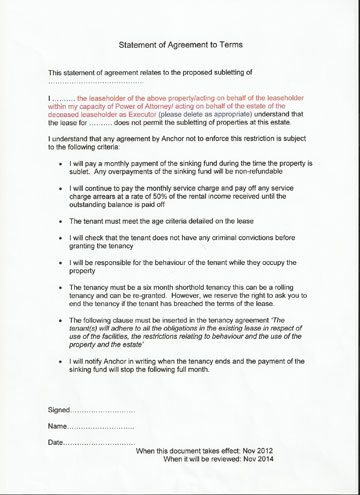 Anyone sub-letting their apartment is to sign a form (left) from Anchor – which appears to have been drafted six months ago – stating that they understand that sub-letting is not permitted in the lease. The legal liability involved in such a document – for both the leaseholder or heir intending to sub-let and for Anchor – is an open question.

The enthusiasm with which Anchor is intent on changing these private leases unilaterally does give rise to understandable suspicions: would the housing association really risk court action over this purely to assist leaseholders who cannot sell up? Or does Anchor have in mind tenants for these unsold retirement leasehold flats?

The Mail on Sunday reported in February 2011 that Anchor Trust sought to obtain additional revenue by keeping the interest of investing perhaps £10 million of leaseholder contingency funds. They spent £5,000 for a legal opinion on whether it would be legal to do so. The answer was “no”.

Exit fees at Anchor sites, which go into the contingency funds, are high. Little will pay 0.9 per cent of the price paid for her flat for every year that she lives there.

An Anchor spokesman said: “Where it’s reasonable to grant consent, we will do so. Any decision made takes into account the extent of reasonable local opposition from fellow leaseholders.  In all cases where consent is sought, we have a strict procedure in place to ensure that the property is only let to a suitable sub-tenant. Each case is considered on its merits.

“The £175 sub-letting fee we charge covers the cost of vetting the prospective sub-tenant, preparing the licence to sub-let and approving the sub-tenancy agreement.

“We do get requests from residents to sublet and the OFT, which has endorsed the principle that leaseholders should be able to sublet their property, said the following:

“In relation to sub-letting, we still take the view that terms in long leases preventing sub-letting have potential for unfairness under the Unfair Terms in Consumer Contract Regulations (UTCCRs). In our view a consumer should be able to seek permission to assign (by means of a sublet) and that permission should not be unreasonably withheld.

“We would see this as being particularly important in relation to leases in retirement properties. In some instances tenants may need to move out due to health issues (often to a nursing home), so subletting the property is an important means to pay service charges, and otherwise maintain the tenant’s investment in the property. Further, where the original tenant has died, often their heirs or estate will remain liable to pay service charges, while being ineligible to reside in the property themselves because of minimum age restrictions. In such circumstances, subletting may be the only means by which the property can provide any economic benefit to the owner. Further in circumstances where the market value of the property has fallen since the tenant purchased it, being obliged to sell rather than sublet is likely to cause significant hardship to the tenant.”

“We strongly refute the suggestion that granting consent to sublet would result in large scale awards for damages for breach of lease. As the OFT has suggested, provisions in leases which restrict the ability to sublet are likely to be unlawful under the Unfair Terms In Consumer Contracts Regulations.”

Sub-letting: LKP trials a simple scheme that benefits all