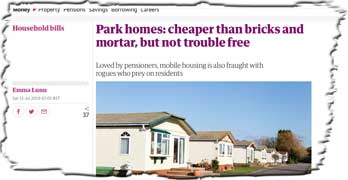 Excellent article by the ever dependable Emma Lunn in the Guardian about park homes.

180,000 people, mainly pensioners, live in these homes which sit amid private estates, sometimes owned by the least salubrious figures in the property sector. Which is saying something.

Activist Tony Turner, 76, bought a park home in Cornwall in 2006. He is the founder of the Park Homes Policy Forum and Park Home Facts, both of which aim to tackle injustices in the park home sector.

Tony Turner says: ‘Fees are raised by different amounts. We want them increased by the same index as state pensions’

Turner says pitch fees are one of the biggest issues. “The increase with RPI is nonsense as renewal dates vary, so pitch fees are raised by different amounts and from park to park. We want to see fees increase by the consumer price index (CPI) – the same index state pensions are linked to,” he says.

Another controversial issue is that, under the current laws, residents have to pay their site owner a commission of up to 10% of the sale price when they sell their park home. This has been hotly debated for years, with residents calling for the commission to be reduced or abolished, and site owners arguing for it to be maintained.

“I think it’s unreasonable,” says Turner. “If you’ve spent £25,000 improving the home so it’s worth more, you’ll end up paying 10% of the inflated price to the site owner.”

He adds: “Also, by the time you’ve paid estate agent fees and removal costs and solicitors, the only thing you can afford is another park home. So you’re effectively trapped.”

Sebastian O’Kelly, of LKP, is quoted saying: ““Park homes are like leasehold, but with some serious menace added to the mix: such as burning down or stealing the park home, or men turning up in middle of the night to howl abuse at ‘troublemakers’.”

Park homes: cheaper than bricks and mortar, but not trouble free

Downsizing to a park home sounds like the ideal move for cash-strapped pensioners. Retirees can swap urban life for a quieter one in the countryside or by the sea, surrounded by people in the same age group. Park homes are much cheaper than traditional bricks and mortar – you can buy one for less than £100,000 in most areas of the country.

Park Homes Policy Forum is an organization that advances the interests and rights of elderly park home residents in the UK. Learn more about us.

ARKHOMEFACTS is intended for anyone who may be considering the purchase of a residential retirement Park Home and to provide links to sources of information for those who have already taken this step. For many thousands, park home retirement offers peace and security among like-minded others but for some it can become a nightmare.

Oh, and why does Shapps want to regulate park homes and not leasehold, even though the issues are so similar?

‘Our David Wilson Homes leasehold house means we don’t own it, or the land, pay ground rent and consent fees to anonymous speculators in freeholds, often based offshore,’ Cheshire woman tells local paper

Boris Johnson signs up to the APPG as pressure grows on lawmakers to be bold on leasehold
Next Post: Lord Best report on regulating managing agents and service charges to be unveiled tomorrow