Sonia McColl, OBE, who heads the Justice for Park Homeowners campaign has had her mobile home stolen.

The 40ft long, 10-ton mobile home was stolen from a yard in Cullumpton, in Devon just as Sonia MColl was due to have it delivered today and move in.

“I was forced to sell my home due to death threats as I would not abandon the Park Homeowners Justice campaign,” claims Sonia McColl. The mobile home is a Stately Albion Chatsworth Silver and its theft has been reported to the police.

A WIDOW has had her £30,000 motor home stolen, left with just the curtains she was hoping to install in her new home. Sonia McColl, 70, said she had been left feeling vulnerable after finding out the new home she had purchased had been nicked from a haulage company’s yard, with the 10-tonne home, sitting on a 40ft trailer, disappearing without a trace. 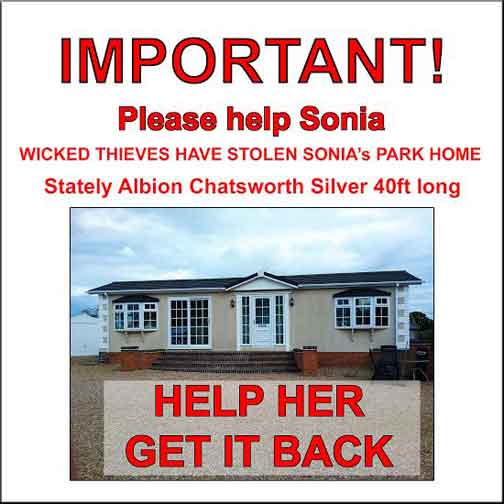 A WAREHAM woman whose campaign laid the foundations for new laws to safeguard park home owners’ rights has been awarded an OBE. Sonia McColl founded the Park Home Owners Justice Campaign four years ago, in a quest to close a contentious legal loophole that had been allowing rogue park home site operators to snap up residents’ homes at a fraction of their true value.

“I bought a new home from the proceeds and was having it moved to a new location. Now I am homeless because the thieves have stolen all that I have.”

Other park homeowners are convinced the theft was motivated and that Sonia McColl was targeted by her numerous enemies.

Leaseholders are used to white collar professional bullies in the property tribunal; park homeowners have that and far, far worse in disputes with site owners, who are often closely linked families from the travelling community.

THE Wareham woman whose campaign laid the foundations for new laws to safeguard park home owners’ rights is set to march on Downing Street again. Sonia McColl, will be joined by supporters including Mid Dorset and North Poole Lib Dem MP Annette Brooke, to deliver a new petition to Number 10 in July.

Sonia McColl’s son David Randall says: “My mother has fought so hard to help and assist the lives of thousands of park homeowners.

“During the last year my mother has had to sell her home to escape death threats delivered to her front door. After selling her home and re-locating to a completely new and undisclosed location, she has now had her new home stolen from her while waiting delivery.

“My mother is now homeless and minus a whole lot of money.

“My mother is an OBE and she deserves this as she worked hard to help others like her and also those much less fortunate.

“This has culminated in her now suffering total loss of everything.

“To see her totally destroyed after all that she has given … in my opinion, no, it was most definitely not worth it!”

In the summer, Sonia McColl delivered a petition to 10 Downing Street and held a conference at Portcullis House, the offices of MPs.

Her meeting was addressed by both Sir Peter Bottomley and Sebastian O’Kelly, trustee of LKP.

Mr O’Kelly said: “This theft is outrageous. Many disputes in park homes go way beyond even the abuses leasehold flat owners experience. Like other leaseholders, park home owners own their pitch on a lease, and numerous games are played at their expense.

“We have too few resources to help park home owners very much, but at least we did something so Tony Turner, whose life was being turned upside down:

A blogger and champion of pensioners living in park homes is facing bankruptcy proceedings next month after a £44,000 libel dispute. Tony Turner, 71, published a website highlighting what he saw as abuses at 17 sites across the West Country owned by JB and J Small Park Homes.