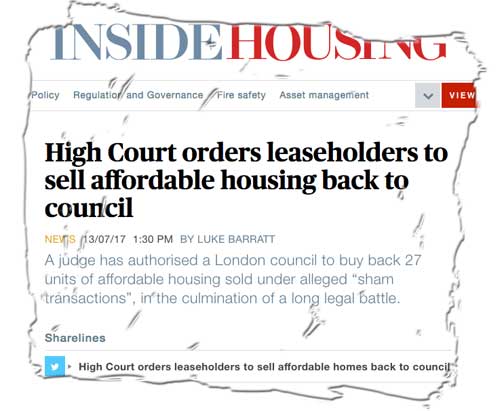 A judge has authorised a London council to buy back 27 units of affordable housing sold under alleged “sham transactions”, in the culmination of a long legal battle.

The report by Inside Housing can be read here https://www.insidehousing.co.uk/news/news/high-court-orders-leaseholders-to-sell-affordable-housing-back-to-council-51450

Under the settlement, leaseholders of 11 of the homes in the Signal Building in Southwark will be bought for £200,000, unless they can find a registered provider of social housing that offers a higher price.

The decision is the culmination of two years of legal battles between Southwark Council and various defendants, including leaseholders, banks and London District Housing Association (LDHA).

Southwark’s claim is that homes in the 22-storey Signal Building in Elephant and Castle and other buildings in the borough – intended for shared ownership under Section 106 agreements – are not being used as affordable housing.

The council says these homes were the subject of “sham transactions” whereby buyers were found who would ‘staircase’ their share of the home up to 100% in a matter of days.

As part of the settlement, the leaseholders will be forced to undertake “a declaration that these flats are bound by the planning obligations requiring them to be used as affordable housing”.

Three of the leaseholders, who cannot afford to pay off the mortgages they took out to buy the flats, will be given a one-year grace period so that they can sue the solicitors who told them the homes were ordinary market sale properties.

Adriatic Land and other freeholders ‘acting like robbers’, Commons told
Next Post: I had to spend £14,000 to change double ground rent to RPI at Ausden Place. But will I get compo from Taylor Wimpey?