Donate
You are here: Home / News / FirstPort / Squirrels in roofs cause fires, so why is nothing being done, ask couple in Peverel block 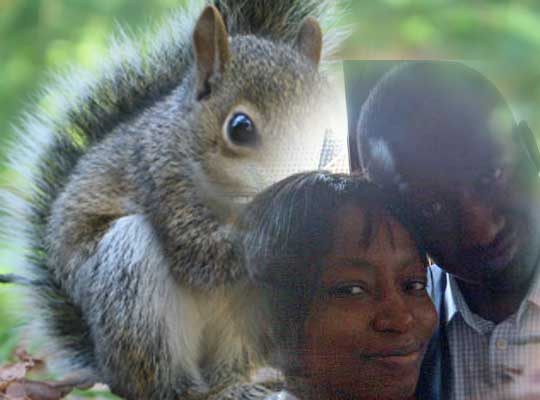 The young couple who spent the entire winter in a leasehold top floor flat with a hole in the roof are still waiting for Peverel to fix the problem.

Squirrels have taken up residence in the roof – a widely acknowledged fire-risk as they gnaw plastic cables – and rivulets of water were clearly visible down the walls.

Ade Bankole, 38, and his wife Otitokan Oluwo, 35, had been complaining to Peverel since October last year without success until LKP took up the issue in March.

Peverel sent a surveyor to the site, overturned an earlier craven and flimsy – if not worse – report from builders saying the problem was “condensation”, and accepted there was indeed a hole in the roof.

Now it is summer and the squirrels are still on the rampage at the 14-unit Crowthorne Lodge in Bracknell.

The couple are finding it impossible to sleep in their £134,000 leasehold flat.

“While we appreciate all the efforts so far, we are still very dissatisfied with Peverel that since this issue was reported some eight months ago we still have nothing concrete to suggest an end soon,” writes Mr Bankole.

“We have never delayed payments of your bills, yet our complaints have not been so responded to, rather we have been made to go through every kind of distress.

“We have been woken up since 2:00am today due to the ferocious activities of the squirrels in the loft like we have been suffering since the issue was reported.

“It is sad not to be able to sleep after having come back home from a long day of work. I want to implore you to fast track whatever you are doing to stop this so prolonged terrible situation.”

Mr Bankole threatens to stop paying his service charges because of the “very below par services”.

The couple were told on June 6 that extensive repairs to the roof are required (see below for list).

But it does seem no effort is being made to stop squirrels enter the roof space – with wire netting, for example.

The couple’s complaints, until they were taken up by LKP, were being dealt with in a very unsatisfactory fashion.

“After my very intensive inspection, I can categorically state that none of the water staining in the two bedrooms and the main living area are in any way being caused by the external roof damage.”

It was a point the contractor was eager to emphasise to his Peverel employers:

“… Once again I can state that under no circumstances is there any damage to the roof or the external walls of the building causing these internal problems, it is all being caused by condensation and if needed I will confirm this in any way that maybe required …

“I do hope this is all that is needed at present …”

After LKP took up the Bankoles’ appalling treatment on March 26, Peverel undertook to send in an independent surveyor and a senior manager.

The report from Aedas Building Consultancy makes clear that water in the flat was due to the hole in the roof, just as the couple had said.

Aedas also pointed out the danger of “vermin” to electrical wiring, as squirrels have been known to start fires.

As squirrels are known to cause fires, why is something not being done?

Following my inspection last week, I have set out below the proposed outline scope of works to address the current defects in the area of roof above the 2nd floor flat.

4) Strip off defective and damaged roof tiles along valleys to dormers;

5) Strip back 2 courses of roof tiles at hips to expose main roof hips and set aside for re-use. Allow for replacing 10 No. tiles to match existing.  Check timber for evidence of decay and/or rot and report any evidence to the Contract Administrator before covering up. Check adequacy and condition of sarking felt at hips and report any defects. Allow Provisional Sum of £250 for the supply and installation of new sarking felt;

6) Strip back 2 courses of tiles at dormer valleys to expose existing timber battens and set aside for re-use. Check timber for evidence of decay and/or rot and report any evidence to the Contract Administrator before covering up. Check adequacy of lead valley detailing and lapping of sarking felt and make good in accordance with good industry practice. Report any issues and confirm what was undertaken to the CA;

8) Re-fix existing and fit new roof tiles at dormer valleys, to include all cutting to suit rake of valley. Bed all tiles in mortar;

9)Re-fix set aside and new half round concrete tiles to hips including hip irons. Bed in mortar;

11) Allow for patch repairs to damaged felt, generally minor splits and punctures (5 No.) not exceeding 250mmx250mm. The Contractor is to confirm the precise location and number of patch repairs undertaken on site to the CA;

12) Clean out all lead valleys. Rake out all loose mortar bedding and re-bed valley tiles;

13) Clear out debris to gutters;

16) The Contractor is to allow for undertaking photographs of all stripped areas of roof to comprise before, during and at completion of the works. These are to be issued to the CA for record purposes;

17) Clear roof and site of all debris at completion.

Pensioners trapped by broken lift in Peverel block make BBC news … and it has happened FOUR times before in the past TWO years!

Imperial Hall fights back … booting out Sterling Estates Management and the freeholder
Next Post: Lord Neuberger: what have you done, as Daejan is cited in property tribunals »