Donate
You are here: Home / News / FirstPort / Dead squirrels in the roof and rivulets of water down the walls … couple feel let down by Peverel

Still with huge gratitude for the efforts you have expended into seeing OM Property Management Company/Peverel attend to their responsibilities in effecting the repairs of our roof and other issues associated with it.

The surveyor and a contractor came along with a staff of OM Property Management Company. They were taken round the flat and the loft as well as the roof. They discovered many missing tiles, weakened tiles and few holes but they too a few
pictures of their findings and promised to send a copy of their reports within 2 to 3days.

However, the OM Property Management Company staff said it will be after the survey report that he will make a proposal of what they intend to do to put things right.

I will send a copy you their report as soon as I receive it as well as their proposal for works. Can we insist on them doing the painting of the walls and the ceiling that have been messed up by the watermarks?

Thanks for everything once again, I hope to hear from you soon.

UPDATE 17.40 April 2: Peverel has today informed LKP that it is to send a senior property manager and an independent surveyor to the site, at no cost to the residents, to investigate the damage. Full statement at the bottom of this article

Dead squirrels in the roof, water pouring down the walls and freezing cold … it has been a bad winter for a young couple living in a Peverel managed block in Bracknell.

And there is no sign of things getting any better in spring.

“There is a hole in the roof and this morning the squirrels were the worst they have ever been,” said Ade Bankole, 38, who works for BHS. “The noise was really bad and there must have been five or six of them.”

In December a workman found a dead squirrel in the roof, which was acknowledged by Peverel. According to Judith Pooni, a customer service co-ordinator, “Access was gained by the squirrel due to the works required to the roof area.”

But far worse are the rivulets of rainwater coming down the walls.

“The furniture was all new and now it is ruined and the whole flat smells of mould and damp,” says Bankole, who bought his £134,000 flat at Crowthorne Lodge almost a year ago and completely re-decorated it shortly after moving in.

Bankole and his wife Otitokan Oluwo, 35, who works in IT information analysis, began to notice problems with the roof last August.

On occasions, the couple, who are from Nigeria, have found the flat’s bedroom to be so damp it is unusable, and both are concerned for their health.

“In October we alerted Peverel without any response after many emails, letter and direct complaints to their webpage until around the end of November,” says Bankole.

A tradesman the couple employed identified broken tiles on the roof, damaged eave boards allowing squirrels into the loft and broken facing tiles. There was evidence of wood eaten away in parts of the loft.

They then sent a registered letter to Peverel’s Luton office.

In January a representative from local firm TCH Roofing and Property Maintenance visited the flat for 15 minutes at 5.30 in the evening – ie when it was dark. A previous appointment, for which Bankole took the day off work, was missed, he claims.

In a written report of February 25, TCH Roofing claimed the damp flat was caused by condensation, owing to the couple leaving their windows open, rather than a damaged roof. Ms Oluwo says she had only opened the widows after returning from work to clear the musty smell

“After my very intensive inspection, I can categorically state that none of the water staining in the two bedrooms and the main living area are in any way being caused by the external roof damage.”

This was a point that report returned to with added emphasis:

“… Once again I can state that under no circumstances is there any damage to the roof or the external walls of the building causing these internal problems, it is all being caused by condensation and if needed I will confirm this in any way that maybe required I do hope this is all that is needed at present …”

This report is flatly contradicted by another local firm, P&G Building Contractors, who supplied an estimate to Bankole of £1,380 to fix the problem.

“On inspection to roof at back of property, soffits have gone to both sides of bedroom,” said P & G. “Also there is one ridge tile missing to back of property and flaunching needs replacing in several places.  Then to front of property flaunching to left hand side has gone on ridges.

“In my opinion this is why there are leaks to a number of rooms in the property.”

The freeholder of Crowthorne Lodge is Holding & Management (Solitaire) Ltd, one of the Tchenguiz empire’s freehold owning companies.

The couple have always paid their service charges, but feel let down by Peverel, which made a point of sending its customers’ charter to the residents.  “Their customer service is terrible,” says Bankole.

“No professional person from Peverel has visited the site to see the state of the roof. We are absolutely disgusted that this has not been sorted out after so many months.

“We are the worst affected by this, but at last the other residents are responding.” 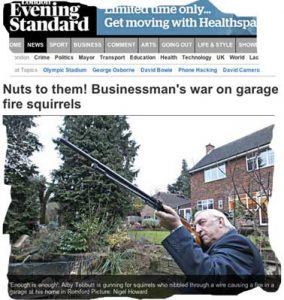 Squirrels inside a property have been known to start fires after biting through the plastic on electrical cables. Here is a recent report in the London Standard …

“We’re very sorry the actions taken so far have not solved the problems experienced by Ms Oluwo and Mr Bankole.

“As well as reviewing our correspondence with them so far, we have instructed a senior member of our property management team to visit them with an independent surveyor, at no cost to them, so that we can agree what needs to be done to address their concerns.

“Our customer charter outlines our commitment to being easy to deal with and we are reviewing our systems and processes to ensure that customers see a marked improvement in the service we provide.”

Squirrels in roofs cause fires, so why is nothing being done, ask couple in Peverel block

We have paid up for repairs to the lead water mains that doesn’t happen. We are so fed up, we are selling