Leaseholders at the fancy Timber Wharf in Manchester are facing a £1 million bill to pay for a new roof, only 12 years after the site was completed.

It is claimed that the building has been beset with leaks within two years of being completed and conditions in some of the flats are so bad that they are uninhabitable.

Several of the penthouses on the top floor have holes in the ceiling where the plaster has come down, and water runs down the walls.

One woman owner in London has reputedly been unable to rent out her property for two years.

“It is a truly  appalling situation here, where some flats cannot be occupied or rented out because of the water,” he said.

The 181-flat development in Castlefield was built in 2002 by fashionable regeneration housebuilder Urban Splash, founded by Tom Bloxham MBE, whose offices are in the building.

As well as being the site’s freeholder, Urban Splash also owns 16 leasehold apartments that are rented out. 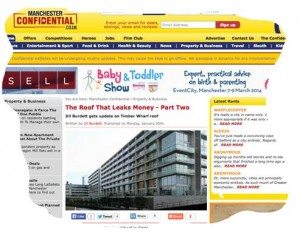 The money should have been collected by January 25, although it is understood that only a fifth of this sum has been received.

LKP was alerted to the issues by residents after two articles appeared on the Manchester Confidential website in December and January.

LKP has asked Urban Splash for a statement to clarify the situation, which has also been copied in to Lucy Powell, the local Labour MP for Manchester Central, and Sir Peter Bottomley, who is heading inquiries into leasehold abuses at Westminster.

Liability for the works is disputed but, astonishingly, has not to date resulted in litigation.

The building was completed by Urban Splash Projects, which has ceased trading, and for some reason – it is claimed – the roof was not covered by the NHBC warranty. The explanation – which has not been subjected to legal scrutiny – is that the warranty did not cover flat roofs.

There are additional issues concerning the maintenance of the building, which are an obligation of the freeholder, in this case Urban Splash.

The residents control the building through the Timber Wharf Management Company, although the managing agent Mainstay was initially appointed by Urban Splash. Indeed, Mainstay manage all Urban Splash’s 18 freeholds.

“It is an on-going nightmare for owners,” said one resident. “Some have not wanted this to be exposed because it could damage the building’s reputation and affect values, but it needs to be brought into the public arena.”

It is understood that BBC’s Rip-Off Britain has been briefed about problems on the site.

It would appear that mortgage lenders are well aware of the problems at Timber Wharf, with sales falling through owing to the on-going problems at the site.

The problems at Timber Wharf are a serious embarrassment for Urban Splash, which was founded by Bloxham shortly after he was a student in Manchester.

With his Japanese pyjama suits, trilby and peroxide goatee beard, Bloxham stood out as the epitome of cool amid the other suited and paunchy house-builders.

Throughout the boom years, Urban Splash was credited with a string of major regeneration works in Manchester, Sheffield and the landmark naval dockyard in Plymouth.

But in the downturn, the debts piled up – as they have for most house-builders – and in 2012 Urban Splash was reporting loses of £9.3 million and debts of £234 million.

“Bloxham repeatedly tells us he has not got the money to sort out Timber Wharf and the banks won’t give it to him,” said Coyle.

“It irks all of us to see Urban Splash boast about all the awards the development has won whilst really the building has never been watertight and had defects from the start, and now the company is leaving the owners to pay the £1m plus bill.

“I, like many owners, struggle to understand how Urban Splash can avoid their responsibilities.”

For its 16 apartments and offices Urban Splash will have to pay £186,000 in contribution to the new roof.

Manchester Confidential reports that it has offered £155,000 towards the costs of the roof, provided the residents waive any legal challenge.

Two weeks ago, Urban Splash is reported as having proposed selling the building’s freehold to raise the £1 million to pay for the work, with leaseholders then paying it back through annual ground rent charges.

At present, the leaseholders pay no ground rent at all.

Property manager Mainstay is being credited in the reports with trying to resolve issues for the leasehold owners, in spite of its commercial involvement with Urban Splash at all its other sites.

One resident said: “Re: Mainstay, let’s just say that a number of us are maintaining a healthy skepticism and think the board of directors (of the residents’ company) need to continue to proactively drive the problem’s resolution.”

LKP will publish Urban Splash’s statement when it is received.

The following statement has been received from Urban Splash at 14.42 February 6:

Thank you for your email of 5th February to our Chairman, Tom Bloxham. He has asked me to respond on his behalf.

I note that you say you have been contacted by residents at Timber Wharf. I’m afraid that we are at this point unable to address the questions you have raised.

Please be assured that we are working very hard with residents (via their appointed representatives on the management company), and also with Mainstay, their appointed managing agents, to resolve the issues with the roof and water ingress at the site.

We do not believe that it is in the interest of any of the parties to have this discussion in public, in the press or with third parties, though you may wish to direct any questions to the directors of Timber Wharf Management Limited, or to Mainstay.

George Osborne’s former nanny faces £100,000 bills and loss of home
Next Post: Help! Our freeholder at Welland Quarter is in administration …