Donate
You are here: Home / News / FirstPort / Will a new spin doctor on £90,000 with ‘personal integrity’ work wonders for Peverel? 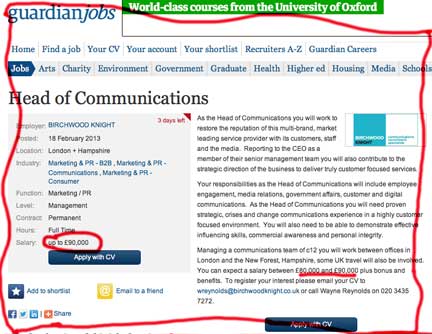 Can this be our old friends at Peverel tarting up their image in leasehold management by recruiting a ‘Head of Communications” for £90,000 a year?

“to restore the reputation of this multi-brand, market leading service provider with its customers, staff and the media”.

The job is based in London and New Forest and the new recruit will “need proven strategic, crisis and change communications experience in a highly customer focussed environment. You will also need to be able to demonstrate effective influencing skills, commercial awareness and personal integrity.”

Splendid. Only Peverel has to hunt with the hounds and side with the hare: its key customer is still the Tchenguiz Family Trust – the Tchenguiz brothers are after £300 million compo for their mistaken arrest in 2011 – that used to own it and which still controls up to 70 per cent of the freeholds it manages.

Ordinary leaseholders are insignificant by comparison, and are hardly “customers”.

Peverel has never been a customer focussed business. It is the creature of McCarthy and Stone, which took in over and then dumped it in the early 1990s when there was outrage at service charges.

John McCarthy, pioneer of the retirement leasehold business model, launched an £800,000 libel case against the Daily Telegraph, which spectacularly failed. It is thought among journalists of the time that the case cost McCarthy a knighthood.

Peverel was sold off to the same venture capitalists who own it now, and then sold on again to a management buyout, before being scooped up by Tchenguiz right at the end of the property boom in 2007.

Its business model has always been top down: given management contracts by developers not leaseholders. The McCarthy and Stone freeholds, now part of the Tchenguiz Family Trust, account for the bulk of these and then high-end London contracts followed during the boom from the likes of Barratt and the Berkeley Group – the latter also sold its freeholds to Tchenguiz.

The Tchenguiz, who still own one per cent of the country’s residential freeholds, brought them all under the management of Peverel in one guise or another. This was a shortlived union as the property crash – and the Tchenguiz arrests in March 2011 – pitched Peverel into administration.

Such is Peverel’s reputation that it has been dumped by Barratt, Berkeley and McCarthy and Stone. And residents at prime London sites – St George’s Wharf, Charter Quay, Chelsea Bridge Wharf, Marathon House – have also organised to get rid of Peverel.

It is unlikely that that top end business – for which ousted executive Lee Middleburgh had responsibility – is coming back. There are nuances to Peverel’s behaviour, however: it has not-resisted the right to manage at 288-unit Palgrave Gardens, near Regent’s Park in central London, in exchange for a one-year management contract. A similar arrangement exits at the massive 422-unit Metro Central Heights, south of the river at Elephant and Castle, which won RTM in November.

But the bulk of Peverel’s business is retirement leasehold and non-prime London odds-and-ends it picked up during the boom years. Both will continue to drain away as competitors that do not have a reputation in need of being restored enter the market and savvy leaseholders realise that there is an alternative.

Peverel has confirmed that it is appointing a head of communications.

Is Peverel gearing up for another sale?

‘Not everything about Peverel was wonderful,’ says Janet Entwistle

Janet Entwistle: ‘Problems with Peverel’s reputation, but we are in it for the long term’

LKP wins Best Online Editorial at LSL Property Press Awards 2013
Next Post: Dead squirrels in the roof and rivulets of water down the walls … couple feel let down by Peverel »