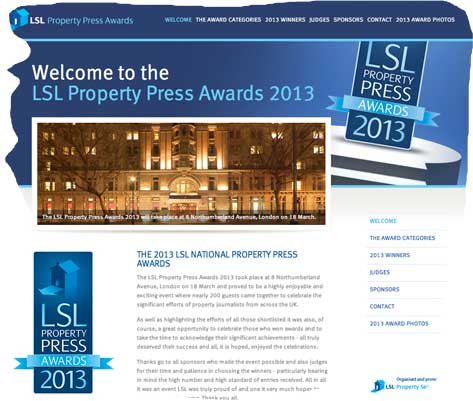 The award was presented to Sebastian O’Kelly, of LKP, by veteran broadcaster and journalist Andrew Neil, who edited the Sunday Times for 11 years.

In handing over the award Neil said the judges were impressed by the website’s trenchant views, thorough investigations and total avoidance of PR puffery.

Other websites shortlisted for the award were the Financial Times Online and Estates Gazette.

O’Kelly also won a Silver Award for “Scoop of the Year” for his coverage of the leasehold dispute involving Plantation Wharf, Battersea.

“The award is a massive public recognition of the achievements of the Leasehold Knowledge Partnership and the importance of its work,” said O’Kelly.

“LKP was set up by Melissa Briggs, the brilliantly effective head of the Campaign Against Retirement Leasehold Exploitation, and draws on the contributions of formidable leasehold campaigners such as Martin Boyd.

“Those who have contacted LKP over the past year, drawing public attention to the abuses they have experienced, are warmly thanked.

“Leasehold is the murky corner of residential property where ordinary homeowners can be preyed upon by monetising freeholders, their managing agents and an array of expensive lawyers.

“At every stage the dice are loaded against the ordinary leaseholder, in spite of all the protections Parliament has introduced to this flawed form of property tenure, that is  unique to England and Wales.

“The amounts of money are vast and the vested interests are formidable.

“On this site you can read about the case of Dennis Jackson, 73, who had his £800,000 flat forfeited from him – all he owns – over a £7,500 service charge dispute in a private court session at Wandsworth County Court. It took all the efforts of LKP and Sir Peter Bottomley, MP, to get this forfeiture lifted with 36 hours to go before it became absolute.

“In what other area of the law can such obvious injustice exist apart from leasehold?”

(The ‘scoop of the year’ category was initially  billed as ‘celebrity scoop of the year’, and LKP was nominated because of John and Sally Bercow buying at Plantation Wharf – the least interesting aspect of the whole saga, but we live in frivolous times. The award was then thankfully changed to simply scoop of the year).

The full list of winners can be read here

In response to an inquiry: these awards are not like those common to the property industry where you buy tables at a fancy dinner (often £1,000-2,000).

None of the journalists at these awards paid a thing: they won on merit (and there wasn’t a fancy dinner either, although quite a bit of other refreshment!)

‘Some of the worst spivs in property are in leasehold,’ LKP tells The Times

National Business Awards will not remove an award to Cirrus Communications in 2009 – even though 15% was for ethics!