March 17 2014: Sebastian O’Kelly, Campaign against retirement leasehold exploitation chairman and director of the Leasehold Knowledge Partnership, last night won a press award for his campaigning journalism over leasehold for the second year running.

O’Kelly won the “Scoop of the Year” category for his report into the scandalous forfeiture of the £800,000 flat belonging to Dennis Jackson, at Plantation Wharf in Battersea. 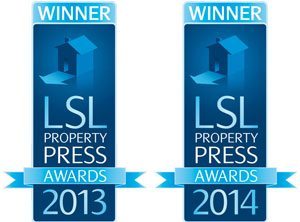 Thanks to the efforts of O’Kelly, Martin Boyd, LKP co-director, and Sir Peter Bottomley, the forfeiture was overturned. The dispute, which began over £9,000 in unpaid service charges, has cost Jackson more than £100,000.

The report can be read here

In winning the award, O’Kelly defeated competition from the Sunday Times, Inside Housing and Estates Gazette.

The award was presented at a ceremony in central London hosted by Julia Somerville, the TV news presenter. She said:

“Please acknowledge the work of Sebastian O’Kelly, from The Leasehold Knowledge Partnership and of course the former property editor of the Mail on Sunday for over 12 years, this year’s Gold Award winner for his scoop on Plantation Wharf.

“The case of leasehold pensioner Dennis Jackson, who would have lost his £800,000 flat in Battersea had not Sebastian himself taken up the case, persuading politicians and the CEO of Prudential to intervene. For his trouble, he was thrown out of Wandsworth County Court by the judge hearing the case. Gutsy stuff!”

Coincidentally, the award category was sponsored by the Property Ombudsman, which will shortly be one of the ombudsman services to which all leasehold managing agents will have to belong.

“Saving Dennis Jackson from total ruin was an LKP team effort and thanks must go to Peter Bottomley, who did not hesitate to wade in to do the necessary even though Jackson was not a constituent.

“The case demonstrates the injustices of the leasehold system in stark clarity.

“It is extraordinary, and a major issue, that the decision on lifting Jackson’s forfeiture – his entire life assets – was held in a closed court from which the public (myself and Martin Boyd) were ejected.

“Yet the deputy district judge did this without a second’s hesitation. In what other area of law would such a decision with such consequences have been possible, except leasehold?

“The rest was equally unedifying: the pleased-with-themselves lawyers who racked up outrageous fees; the remorseful freeholders insisting on meeting LKP to say that they did not know how to stop what they had started and did not want to take away a pensioner’s £800,000 home; the residents of Plantation Wharf, who at a certain point could have stopped this litigation but sat on their hands.

“Jackson’s fellow leasehold litigant Rosemary Irving, and former chair of the residents’ association at Plantation Wharf, died a week before the final LVT case was heard.

“The awfulness of this case needs to be read in entirety, and the OFT should note the wrongs that can happen in leasehold.

“Jackson is now completing the sale of his flat and, although £100,000 poorer, he can carry on with the rest of his life.

“He doesn’t need to give Plantation Wharf a second’s thought, and it certainly doesn’t deserve it.”

March 2013: The Leasehold Knowledge Partnership winning Best Online Editorial at the LSL Property Press Awards in March was a massive public recognition of its campaigning achievements.

LKP won the award in the face of competition from the Financial Times Online and Estates Gazette.

It was a team award, with due credit to Martin Boyd, head of LKP strategy and Charter Quay leaseholder, who provides invaluable advice on handling leasehold disputes.

The award was presented to Sebastian O’Kelly, of LKP, by veteran broadcaster and journalist Andrew Neil, who edited the Sunday Times for 11 years.

In handing it over, Neil said the judges were impressed by the website’s trenchant views, thorough investigations and total avoidance of PR puffery.

Fury at ‘life-shattering’ forfeiture case held in a secret court