Donate
You are here: Home / Latest News / Thanks LKP for raising Grenfell issues. Now we are giving yet more money to LEASE, says housing minister 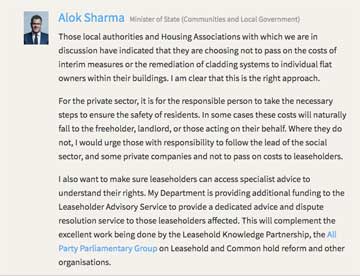 We have intervened in a number of these cases, and will continue to do so.

Our intervention at Blenheim Centre / Reflexion on behalf of leaseholders resulted in freeholder Legal and General agreeing to pay the £165,000 a month fire marshal cost and to remove the Grenfell cladding, which may be a total bill of around £10 million.

Now the housing minister has kindly acknowledged our efforts, and as a result offers yet more money to the flawed Leasehold Advisory Service.

“My Department is providing additional funding to the Leaseholder Advisory Service to provide a dedicated advice and dispute resolution service to those leaseholders affected.”

LKP is strongly critical of this quango. Concerns about it have been raised in the Commons and Mr Sharma’s predecessor had to tell the Leasehold Advisory Service, which sold its services to some of sector’s most unsavoury operators, that it must be unambiguously on leaseholders’ side.

Dudley Joiner’s Team Property Management made insolvent by Quadrangle House RTM
Next Post: Enfranchisement, commonhold and managing agent regulation are first up for the Law Commission