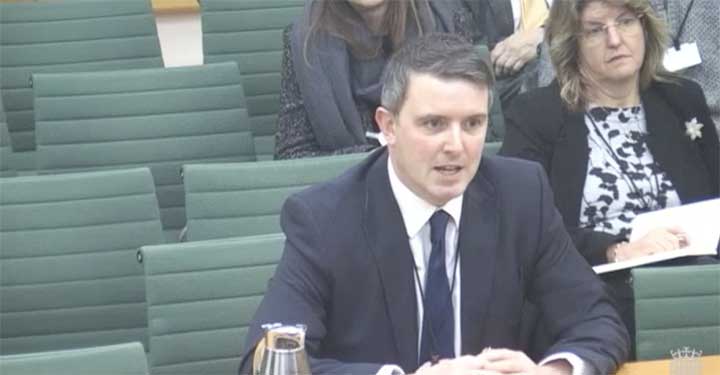 By Sebastian O’Kelly
UK Finance, told MPs that the leasehold sector “works fairly well”, while drawing a veil on the doling out of loans to dodgy, doubling ground rent properties.

Matthew Jupp, of UK Finance, formerly the Council of Mortgage Lenders, was speaking to the Communities Select Committee on January 14.

But he could not say how many re-sales of leases with doubling ground rents have been turned down for mortgages – about which, LKP is contacted about twice a week. And not all was rosy as, he said, there are “some very poor leasehold terms out there”.

Mr Jupp said: “In extreme cases, if you are talking about something like a ground rent that doubles every 10 years, which we are all very aware of, yes, you are likely to find a restricted market for mortgages.”

Actually, the mortgage lenders were not “very well aware” of predatory ground rent terms, otherwise they would not have complacently handed out money on these flakey property assets.

UK Finance only reacted to the problem after the Leasehold Knowledge Partnership persuaded MPs and mainstream media to take the issue up. Until then, the lenders seemed to think ignorance was bliss, when it came to problematic leasehold items on the mortgage book.

Some of these properties – we think there are around 12,000 doubling new build ones and around 100,000 with onerous terms above 0.1% – are not going to be varied to ground rents aligning with RPI.

So, some lenders are not necessarily going to get their money back, and that will include members of UK Finance.

And while on the subject of figures, it is curious to see UK Finance repeating the 4 million plus figure for leasehold properties, only arrived at after MHCLG co-operated with LKP to provide semi-accurate figures on this far larger than thought sector of the housing market.

Why did a minnow charity like us have to do this? Was assessing the size of the sector all to much for the mortgage lenders whose business is involved in it?

Generally, Mr Jupp’s evidence was an endorsement of the present, unreformed leasehold system.

Breaches of lease leading to forfeiture (where the entire asset, including any mortgage, can be lost);

Unpredictable additional costs to the leaseholder – service charges hikes, major works, cladding – and their ability to pay them;

Mr Jupp explained that the UK Finance handbook calls “for the ground rent to be predictable, to be understood as to what the level is going to be, to be set out quite clearly, and to allow that to increase periodically by a reasonable amount. It does not talk about “onerous” as such.”

He added: “There is not a set definition of what lenders mean by “onerous” in those cases. Lenders ask their conveyancers that are involved in that transaction to tell them if they feel there are terms within the leasehold that are unusual and across certain thresholds. That will be for individual lenders on a case-by-case basis.”

These conveyancers, almost always recommended by the developers, appear to have acted as obliging stooges: failing to alert their clients, or the lenders, of clauses in the lease that devalued it.

“In some cases, yes, individual lenders will make a commercial and risk decision not to lend in those particular cases. For example, ground rents that double every 10 years are a very well-known case.

“We recognise that, and we want to see action taken to support those particular leaseholders and see those very bad leasehold terms changed and brought to an end.”

However, when Mr Jupp was asked by Bob Blackman MP how many people had been turned down for loans on doubling ground rent properties, he replied: “We do not collect that data.”

But Mr Jupp reported his “anecdotal” assessment: “We are seeing a lot fewer properties coming through that have onerous or unfair terms and conditions within them.”

As for commonhold, Mr Juppe said:

“One of the biggest difficulties for lenders in assessing commonhold risk is that there is virtually no data out there for England and the UK.

““Assessing the risk within the UK is really, really difficult and that makes lenders cautious, so it is a theoretical concern.

“There are also aspects of the way that commonhold is written into our legislation that lenders have concerns about, in particular what happens when a commonhold winds up, whether that is voluntary or due to insolvency.”

Mr Jupp expressed his concerns about criticisms of the leasehold sector:

“Generally speaking, the leasehold market works well. Lenders are concerned about policies, or indeed language being used, that may make those properties more widely seen as less attractive and, as a result, a two-tier market developing.”

One might have hoped from some words of thanks from UK Finance, given that it seems to have been unaware of the rubbish some of its members were lending on. Alas, there were none.

“We do not have that at the moment [a two-tier market]. There are some cases of people who find it difficult to access mortgages but the reason for that is that there are some very poor leasehold terms out there. The focus should be on rectifying those so that those leaseholders can access mortgage finance. There is not a much more widespread problem than that.”

Theresa May also thinks that ‘building owners’ – freeholders – will pay for Grenfell cladding
Next Post: Law Commission seminars on commonhold and RTM launched »