– Leasehold tenure itself disempowers residents and makes them vulnerable

– Commonhold should be explored

– Right to manage needs to be made easier for the elderly 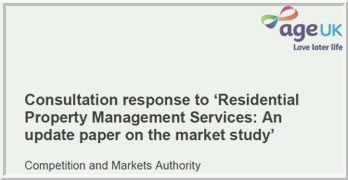 AgeUK has made a powerful and agenda-setting intervention to the leasehold inquiry by the Competition and Markets Authority.

It has bluntly rejected any further efforts at self-regulation (by the trade bodies ARHM, ARMA, RICS) “to curb bad practice and over-charging in parts of the sector”.

Instead, it argues for “improved regulation to offer better protection to older leaseholders …

“Over the years voluntary codes of practices have been designed to eliminate and reduce bad practice by managing agents. These have had limited success in reaching all parts of the retirement housing market.”

It identifies leasehold property tenure as the ultimate source of all that is wrong in the sector.

“The status quo tends to work in favour of providers, rather than in the best interests of residents …

“Fundamentally, the leasehold system itself creates many of the ongoing problems linked to property management disputes and results in an imbalance of power between leaseholders and managing agents …

“There should be a greater degree of standardisation and clarity in leasehold contracts, especially in the retirement housing sector. Alternatively, the adoption of the commonhold system could offer greater consistency and reduce disputes over terms of contacts.”

AgeUK’s enthusiasm for commonhold is shared by LKP. A simpler and immediate alternative is to build retirement housing with a residents’ management company at the outset, meaning that residents can boot out a management company whenever they choose – rather than having to fight for right to manage.

Retirement Security Limited, founded by Bob Bessell, actually does this, but no other retirement house builder wants to reduce its control over the future management of the residents – with all the income streams that can be involved.

Right to manage is also addressed by AgeUK.

“Older leaseholders need support to enable them to switch managing agents or take up the Right to Manage, if it is to become an effective tool for improving the market through greater competition.

“Most older people want quiet enjoyment of their home with the reassurance that managing agents comply with high professional standards. Relying on competition in the retirement housing sector to achieve reform is unrealistic and distracts from the need for better regulation …

“… some residents took the view that Right to Manage could significantly lower service charges and wanted to encourage other leaseholders to take up the opportunity. However, there was also a view that this was more likely to happen where residents had a professional background in management, finance or accountancy.

“Although some residents might be interested in the idea of Right to Manage they may not have the confidence or experience to take this forward and would therefore be disadvantaged.”

AgeUK echoes LKP’s concern that the CMA has relied on a superficial and flawed opinion poll from Ipsos MORI for its information on the leasehold sector. Ipsos MORI has apologised to LKP, and amended its first version, after disputing LKP’s estimate of the size of the leasehold sector – which are now the figures accepted by the Department of Communities and Local Government.

“The Ipsos MORI survey does not give a complete picture of the experience of older leaseholders living in retirement properties. This evidence needs to be put in the context of other previous OFT investigations, court records and casework statistics available from advice agencies.

“The survey on its own should not be used as the basis for any policy decisions affecting older leaseholders.”

LKP warmly applauds this conclusion. We, too, are astonished that the court record of leasehold disputes had not, hitherto, formed part of the CMA data.

At a meeting at the Home Builders Federation in August to discuss the ill-fated “Campaign for Housing in Later Life” – essentially a call by retirement builders for easier planning consents – the CMA’s interim report was used to diminish LKP’s concerns.

“… according to our leaseholder survey [by Ipsos MORI], leaseholders in retirement properties had higher levels of satisfaction than other leaseholders with property management services.”

LKP is delighted that AgeUK has also dismissed this opinion poll as a “basis for any policy decisions affecting older leaseholders.”

Unlike the CMA, LKP and AgeUK agree that elderly leaseholders are disadvantaged compared with younger flat-owners is using the existing protections of the law.

“Older leaseholders can be vulnerable to poor advice, exploitation, and unfair treatment – especially if they are isolated and do not have support from family or friends.”

The role of the Association of Retirement Housing Managers (ARHM) – a trade body overwhelmingly funded by one commanding management company, Peverel Retirement – was scrutinised by AgeUK, which has contributed to its code of practice.

“Over the years the retirement housing industry has made various commitments to improve standards in the sector. The majority of managing agents provide a good service, but this is not the case for all.

“There are limited penalties for ignoring the ARHM code and few resources to follow up complaints. Ignoring the code can offer some managing agents the opportunity to gain a competitive advantage by hiding or misrepresenting their costs. The threat of a managing agent being taken to a first tier tribunal is insufficient to discourage some from looking at ways of unreasonably raising profits at the expense of the leaseholder.

“The proposals to bring together the ARHM code with ARMA-Q, may improve clarity and help to promote best practice across the sector, but on its own this is unlikely to be enough.

“Although key players in the sector have made a public commitment to follow best practice, older leaseholders should not have to rely on the good will of the industry to be assured of best practice and guaranteed standards.

“We are concerned that without a stronger legal framework there would be a danger of the providers slipping back into bad practice, particularly as a result of changes in ownership, without improved regulation. Therefore, Age UK believes that the remit of the CMA should still include reform to the legal framework, setting out the pro and cons for consideration by legislators.”

A very useful suggestion from AgeUK is that the CMA consider “the role of managing agents in the sale of properties and levels of charges for the administration of sales”.

Although it is voluntary to use Peverel’s Retirement Homesearch or Churchill’s Millstream, there are reasons why it is altogether more convenient and effective.

The property manager’s house manager will show potential buyers round the property, and is rewarded with a small tip for doing so (typically £100). Outside estate agents with clients would have to make an appointment to be admitted, which may have frustrations.

Yet the estate agency fees are routinely as high as three per cent. It has been suggested to LKP , by a property investor in retirement properties, that Retirement Homesearch is probably the most profitable estate agency in the country, given its given its minimal overheads.

AgeUK has also criticised the role of the Leasehold Advisory Service, which serves all sides in the leasehold sector: giving free advice on the law to ordinary home-owners, while seeking to monetise advice to freeholders, their legal advisers and property managers.

LKP has long criticised LEASE for this inequitable position, which is not what Parliament intended when the quango was set up. MPs set up LEASE to help vulnerable flat owners deal with some of the predatory practices in residential property management.

That role has been corroded, LKP  feels and it would appear AgeUK agrees.

“We would like to see improvements in the availability of services designed to help older leaseholders. Any service offering conciliation and mediation would have to have a neutral role and enjoy the full confidence of residents.

“While we recognise the important work of LEASE, its role in providing legal advice to both providers and leaseholders is problematic in terms of reform.

“Although leaseholders may gain some benefit from accurate and comprehensive legal advice, offered by LEASE, they may not have the financial ability to take legal proceedings to resolve their dispute and therefore obtain less benefit from the advice, compared with managing agents.

“Offering leaseholders advocacy and mediation services and/or a reformed system of dispute resolution – with protection for the leaseholder from costs – would allow a fairer balance of interests.”

After only a week, FirstPort (formerly Peverel) makes a debut in the Eye
Next Post: Law Commission likely to end the exit and sublet fee payola