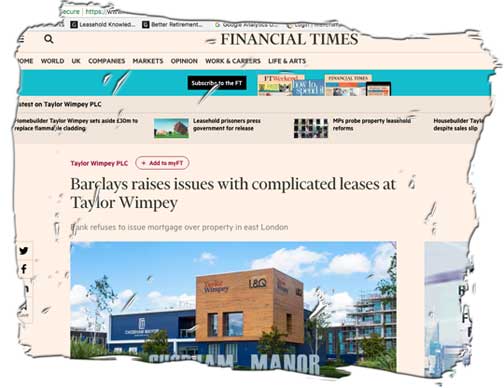 Barclays Bank is refusing to issue loans to purchasers at Taylor Wimpey’s Chobham Manor development in the Queen Elizabeth Olympic Park in Stratford, east London, where homes fetch up to £1m.

The Financial Times reports today that a subsidiary company, jointly owned by Taylor Wimpey and L&Q housing association, holds the head lease to the development. The London Legacy Development Corp holds the freehold.

Barclays has refused to issue a mortgage against an apartment in the first phase of the development because of an unusual clause written into the head lease. This allows an administrator to “disclaim” the lease if the Taylor Wimpey and L&Q subsidiary became insolvent.

A spokesperson for Barclays said that, if the head lease stopped existing, any underleases granted out of it would also be terminated. This would be “particularly problematic” if the bank was taking security against underlease.

“Barclays does not assess the solvency of the head tenants when we lend against an underlease, and we have no control or oversight over the head tenant’s solvency throughout the term of our loan,” the spokesperson added.

After being questioned by the Financial Times, Taylor Wimpey said it would look to amend leases for all current residents of the development to fix the issue. It would not disclose how many homes were affected.

The FT says: “The incident raises questions about the increasingly complicated leasehold structures being used by some top housebuilders, which are leaving lenders nervous about the potential future value of their security.”

The company undertook to cease selling houses as leasehold tenure from January last year, after the Leasehold Knowledge Partnership raised the issue with with MPs and media.

Chobham Manor bills itself as the first of five “neighbourhoods” to be built at the Olympic park. More than 6,800 homes are set to be built over the next two decades.

How scam values on equity release loans affect leaseholders. And YOU need to stop it …
Next Post: Is the Bank of England pandering to freeholders over punitive lease valuations?