Donate
You are here: Home / Latest News / Competition and Markets Authority relies on skimpy MORI poll of 1,050 for its report on leasehold management 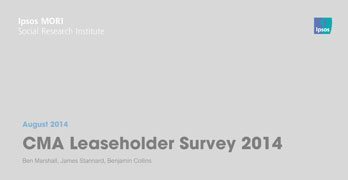 Alarm bells are ringing at LKP about the report by the Competition and Markets Authority into leasehold management.

We were already anxious that the Competition and Markets Authority – many of whose personnel worked for the defunct Office of Fair Trading – were manoeuvring to down play concerns in retirement leasehold.

Some of these concerns expressed at the outset of the study “have not been supported by the evidence”, the CMA said in August.

“… according to our leaseholder survey, leaseholders in retirement properties had higher levels of satisfaction than other leaseholders with property management services.”

The Competition and Markets Authority also believed that in retirement leasehold “some individuals will be knowledgeable, able and motivated to represent them … Based on the evidence we have received so far, the problems we are finding in the market apply to the retirement sector in the same way as anywhere else (lack of accountability and transparency, lack of control, ineffective redress etc.).

LKP has pointed out to the Competition and Markets Authority that there are several blindingly obvious disadvantages in retirement leasehold: residents can be in their eighties and nineties; several flats are usually empty owing to further care needs or death; income and energy levels are low.

In LKP’s experience, many active sites that have broken free with right to manage have an energetic relative organising the residents.

Now it emerges that the Competition and Markets Authority is relying on a bought-in Ipsos Mori poll that quizzed 1,050 leaseholders – a figure matched by the DAILY readership of the LKP websites.

Only 131 retirement leaseholders were questioned, and only 17 who had any experience of the property tribunal.

The survey does at least confirm that leaseholders in RTM/ RMC managed blocks are more content (83 per cent), compared with those appointed by freeholders, 58 per cent.

Four in ten leaseholders have been dissatisfied with the freeholder’s management.

But broadly the Ipsos MORI poll confirms what is already widely known: that a great number of leaseholders are clueless about their legal status, their rights or the management of their block.

A full 90 per cent thought that they owned their flat – rather than renting it from the freeholder – and 78 per cent had no awareness of the property tribunal.

More than a third appear to think that they achieved right to manage before the Commonhold and Leasehold Reform Act 2002, which is clearly wrong.

If you read this story on the LKP web site relating to the RTM legislation passed in 2002 there were 89 companies formed by the end of 2003 (that does not mean the sites had gone RTM by then). By 2012 that number had slowly risen to 4,365 a number with will still include those RTMs that never succeeded, or those which subsequently closed.

In a curious aside right at the start of the report, Ipsos MORI went out of its way to rubbish LKP’s leasehold figures – 4.1 million privately owned leasehold properties in England. Having carried out the poll in April, it had not realised that the Department of Communities and Local Government had accepted the figures’ validity.

Following an intervention by Martin Boyd, of LKP, who has been working with DCLG statisticians on the leasehold figures, Ipsos MORI apologised  and amended its report.

Quite why Ipsos MORI believed the Competition and Markets Authority would wish to see LKP gratuitously – and, as it happened, wrongly – criticised in its report is unknown.

64% had good or faily good service

14% neither good nor bad

Ipsos MORI decided that flat owners were hard to find – even 4.1 million of them – purchased its list of potential interviewees from another market research firm called UK Changes.

In the main survey of 1,050 people, 131 said they lived in retirement homes 269 in private sites 142 in sites with an RMC or RTM. 166 in LA owned sites with or without a Tenants Management Organisation.

The survey then says this may well be an unrepresentative sample – they could also have added that there would be a strong chance some respondents did not understand the nature of the ownership of the site they lived in.

It was misleading of Ipsos MORI to ask how leaseholders would rate the “collection of service charges and preparation of accounts”. 42 per cent of the 907 respondents said “very good”.

We could have told the Competition and Markets Authority almost all freeholders are very, very good at trying to get the service charges paid, but a much smaller percentage do as good a job at sending out accounts.

How the survey can conflate these two diametrically opposing issues is unclear.

Of the wide list of issues that worried leaseholders, just one per cent said insurance costs were too high.

If that does not send the message that something is wrong with the survey (or leaseholders’ understanding of the question) nothing will.

Of those who used the property tribunal, 41 per cent were very dissatisfied with the outcome, in spite of only 29 per cent saying the tribunal found against them. Oddly 12 per cent said that they could not remember the outcome.

It emerges we are talking about percentages of 17 people.

But that is better than the four who had used the ombudsman services.

The most common place to go for help when a leaseholder had a problem it was not the Tribunal (three per cent) or the Ombudsman (two per cent), but their local MP (seven per cent). As LKP knows from its experience the vast majority of MPs have little understanding of leasehold issues so if they are the best source of assistance it suggests the market has a problem.

For accessing information when a leaseholder has a problem the news is also not good for the formal systems.

Then we have friends and the council, also on five per cent.

Down down at 4 per cent was LEASE, the government-funded body intended to provide information on leasehold law.

This could and should have been an important study of the leasehold sector, but it needed to ask those who know something about it before the questions were drafted.

Rather than asking pallid questions like “do you ever have meetings about the management of the property?”, they could have asked “does your site have a recognised tenants’ association for the leaseholders, do you know what rights such a group has?”.

From a random sample of just 1,050 people, the chances of finding the key residents on the site who happens to have read all the accounts and understood the issues is staggeringly small.