Donate
You are here: Home / Latest News / Does Li Ka-shing own your Adriatic freehold, or Hutchison Whampoa, or billionaire Frank Sixt, or Astor? Only Long Harbour knows, and it’s not saying …

The secretive Long Harbour fund came under further scrutiny today, with an article in The Times on leasehold house owners in the north-west mounting a collective challenge for their freeholds.

But who owns these freeholds, where the beneficial ownership is hidden behind nominee directors of a company secretary group headquartered in Jersey?

Sir Peter Bottomley, Conservative candidate for Worthing West and on the campaign trail, demanded to know on The Times website:

“May we know the investors in the fund? Will those investors come to an open discussion with an all-party group of MPs to discuss the issues? Will Longharbour be open about their lobbying and will they list their private ‘public affairs’ engagement with government?”

The Leasehold Knowledge Partnership, which was the secretariat of the 177-strong All Party Parliamentary Group on leasehold reform, has also made inquiries … to Long Harbour, to CK Hutchison Holdings (formerly Hutchison Whampoa) and to Canadian billionaire Frank John Sixt, who was a director of Long Harbour.

No reply has been received. Nor any statement from Long Harbour’s PR / lobbying firm Crosby Textor, which is master-minding the Conservative election campaign under its Australian boss Sir Lynton Crosby, who is termed the “the Wizard of Oz”.

However, after inquiries last March, a notice did appear on the Long Harbour website that a small shareholding in the company was owned by CK Hutchison Holdings. 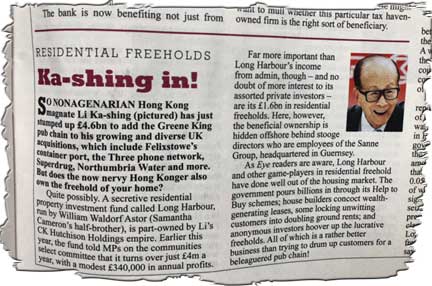 The magazine Private Eye (above) also raised these questions in October under the heading “Ka-shing in!”

Long Harbour itself is a small company turning over £4 million a year from leasehold administration fees and making a profit of £340,000. But it manages assets worth £1.7 billion, which are owned by different entities, many being variations of Adriatic Land and Abacus Land.

In the past, Crosby Textor has assured LKP that ownership of the residential freeholds belongs to UK institutional pension funds. But it is unexplained why they do so secretly behind nominee directors and in many cases offshore.

It is also unexplained why a vast conglomerate like Hutchison Whampoa – which owns the Three mobile network and Felixstowe container port – would have a shareholder in a relatively small company investing blameless pensions in residential freeholds.

Instead, LKP has long suspected that most of the fund owners are, in fact, affluent individuals and private equity investors.

“My belief is that more openness will lead to the owners of so many leaseholders’ freeholds making quick lower-cost deals that would reduce the damage they have been doing.”

Well, amen to that.

Freeholders have considerable power over leasehold home owners – not least in blocks of flats facing the stress and financial disaster of combustible cladding. It is surely right and proper that they are known and publicly accountable?

Some of our freehold clients are offshore, admits Will Astor’s HomeGround