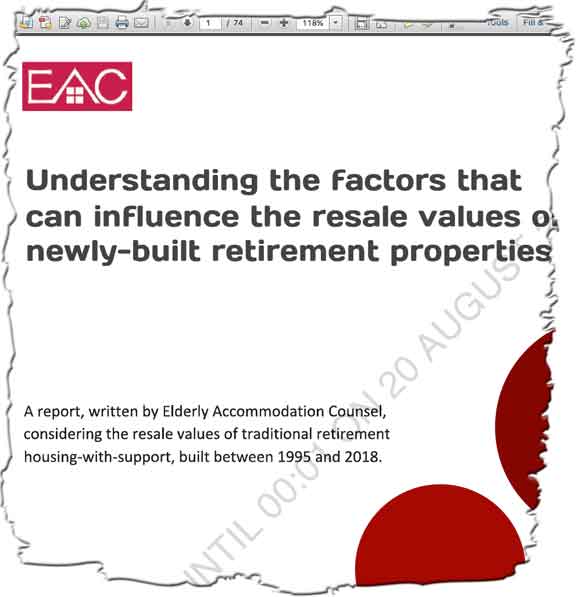 Evidence based on sales since 2010

In spite of abundant evidence on the Land Registry of catastrophic falls in value of retirement properties, today (August 20 2019) the Elderly Accommodation Counsel reports that newer properties have increased in value.

The report is based on a limited number of sales since 2010.

However, it acknowledges that the trend for resales of properties bought between 2003 – 2009 would have gone down.

A recent example of consistent falls in value is Bridewell Court, in Widnes, Cheshire:

A family selling a McCarthy and Stone retirement flat with a rip-off lease condition have been saved £25,000 after the case was taken up by Better Retirement Housing. Rita May Bailey, who is now deceased, bought the one-bedroom flat at Bridewell Court, in Widnes, Cheshire in February 2008, which has a registered price of £167,450.

LKP was a member of the consultative group to the report, but when we were shown a draft we urged non-publication.

“We do not endorse this report, which serves the interests of the lobbyists for an unreformed retirement housing sector. We urge the EAC to reconsider its publication.

“At a time when the government and Law Commission are considering wide-ranging reforms to leasehold as a result of abuses of the system by plc house builders, we are surprised that EAC is involving itself in analysis of unverifiable incentive data from retirement house builders …

“As a consumer group, we are extremely wary of house builders’ claims concerning the value of incentives that supposedly account for up to 10% of the value of new retirement properties.

“As this information is not in the public domain and is not verifiable, it should be discarded.”

In the original report the EAC suggested that “HM Land Registry considers including information on financial incentives within their ‘Price Paid’ data set, so this information is available for consumers”.

We strongly opposed this notion, and added “we have no doubt that the Land Registry will dismiss this suggestion, which would be in direct opposition to consumers’ interests”.

The EAC’s idea of nobbling Land Registry data on the say-so of a commercial house builder, thankfully, appears to have been dropped.

We are also concerned about the uncritical referencing of part-exchange sales, which formed part of the 2012 Channel Four Dispatches investigation into retirement sales.

This programme was unaccountably absent from the EAC research.

So was any reference to the work of Carlex / betterretirementhousing.com and LKP itself.

We told the EAC inn February:

“This strategy has inevitably given rise to controversy, and damage to certain house builder brands.

“There is no reference to the two Office of Fair Trading reports into the sector, the finding of collusive tendering by Peverel / Cirrus – exposed by us – and the £100,000 “goodwill” payments to settle this issue.

“There is no reference to Carlex / BetterRetirementHousing.com, why it was founded and why MPs supported it, and subsequently the Leasehold Knowledge Partnership, in one of the largest and most active All Party Parliamentary Groups.”

The report contains very familiar digressions about the desirability of retirement housing – avoiding early dependence on health and social service; ameliorating isolation and loneliness etc – none of which are relevant to discussing resale prices.

My granny’s Audley Retirement home ‘was a money pit’ costing £48,000 in exit fees