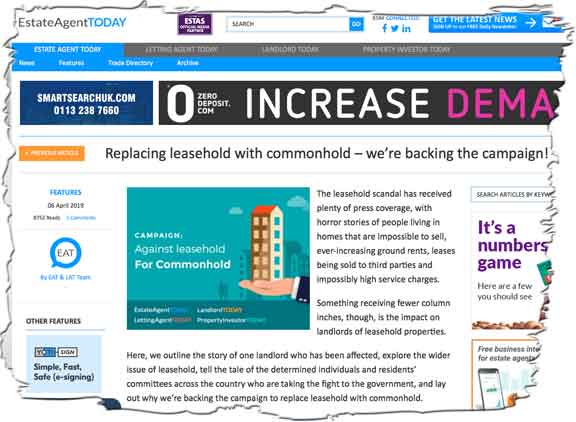 The trade news website Estate Agent Today has come out in favour of LKP’s campaign to introduce commonhold.

It is the latest endorsement of a campaign to reinvigorate commonhold, which has been on the statute book since 2002 but has not had take up because developers and assorted speculators make so much money playing the angles of residential leasehold.

The leasehold scandal has received plenty of press coverage, with horror stories of people living in homes that are impossible to sell, ever-increasing ground rents, leases being sold to third parties and impossibly high service charges. Something receiving fewer column inches, though, is the impact on landlords of leasehold properties.

LKP helped set up and acts as the secretariat of the All Party Parliamentary Group on leasehold and commonhold. It has hosted a number of parliamentary meetings to discuss commonhold, calling in academic experts from Australia which moved to strata commonhold title in the early 1960s.

So it is very welcome news that a publication for estate agents has been persuaded to support commonhold.

It would be even better if it backed a ban on the sale of leasehold as “home ownership” when it is simply a tenancy and not a very well liked one at that.

The Leasehold Advisory Service, which has been silent in the face of scandals in the sector, even admits this:

The move to commonhold begins

RBS kicks leaseholders facing forfeiture when they are down, LKP tells FT
Next Post: Freeholders’ ‘cowboy’ insurance commissions at leaseholders’ expense attacked in The Times