Donate
You are here: Home / Latest News / RBS kicks leaseholders facing forfeiture when they are down, LKP tells FT 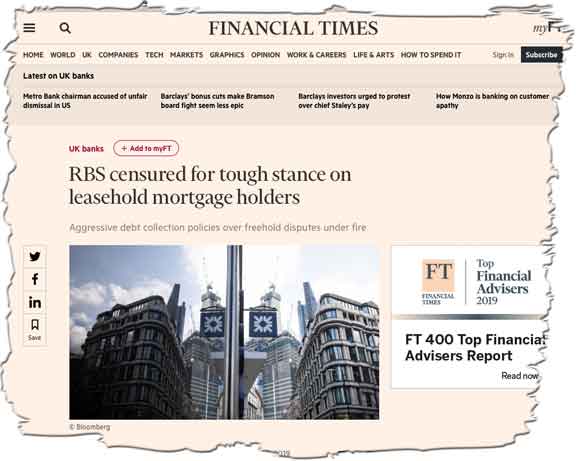 LKP has accused the taxpayer-owned Royal Bank of Scotland of “kicking leaseholders when they are down” in the Financial Times.

The issue concerns leaseholders facing forfeiture. This is usually avoided when lenders – whose mortgage is at risk on leases that face forfeiture – step in to settle the debt.

Royal Bank of Scotland has been accused of “kicking people when they’re down” by enforcing aggressive debt collection policies against customers who own leasehold properties. The taxpayer-owned bank forces mortgage customers who fall into arrears owing to disputes with their freeholder or property management company to repay the debt within 12 months or face repossession, despite a longstanding legal precedent that allows most borrowers to repay mortgage arrears over the remaining term of their loan.

They issue a loan that is added to the mortgage.

This is precisely what happened in the case of Dennis Jackson, although the Prudential initially seemed pretty unconcerned by the threat to its £200,000 loan and the forfeiture was actually granted.

Dennis Jackson and Plantation Wharf: Did it have to end like this?

It required considerable effort on the part of LKP, Sir Peter Bottomley and Tidjane Thiam, then the Prudential CEO, to get the bank to take the matter seriously.

In the event, Mr Jackson sold his flat, pay off his debts and moved on.

Farieda Chandoo, a hospital secretary, still lives in her flat after failing to fight a £40,000 major works bill from Southwark. She now has debts of more than £100,000 on the property, having picked up the council’s legal bill.

But RBS is insisting that leaseholders repay these emergency loans within 12 months or face repossession.

Sir Peter Bottomley, LKP patron and chair of the All-Party Parliamentary Group on Leasehold and Commonhold Reform, called on RBS to think again.

“If they choose to reverse these [tough] penalties on innocent borrowers they will earn my respect,” he told the FT

“The threat of forfeiture is already a nuclear weapon for freeholders in disputes . . . It’s unfair enough as it is without banks making it worse — it feels like kicking people when they’re down.”

RBS has form for curious decisions on leasehold and commonhold property tenure.

It declined to issue mortgages on commonhold tenure – having doled out loans on all kinds of flakey property assets to speculators – which was a bit of an own goal when the developer went out of business at the commonhold site Spire View, in Pickering, North Yorkshire.

This meant it had to sell off the units with a tenure it would not lend on.

Fortunately, others did lend on the scheme, which is an example of a successful commonhold scheme in England (there are millions of others elsewhere).