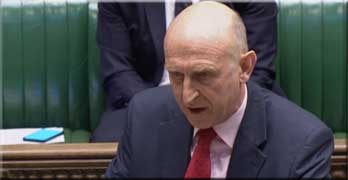 The government was under attack in the Commons today over its inactivity over Grenfell cladding in private blocks of flats.

John Healey, Labour shadow housing secretary, made a powerful attack on Housing minister Kit Malthouse, asking “if the government cannot deal with this, what is it in office for?”

Mr Malthouse said, “as a result of our interventions” there are commitments from owners [MEANING: the freeholders] of 268 privately owned buildings, 212 of whom have either started works, completed them or have commitments in place to remediate. There remain 42 for which the owner’s plans are unclear.

Hansard (the Official Report) is the edited verbatim report of proceedings of both the House of Commons and the House of Lords. Daily Debates from Hansard are published on this website the next working day.

John Healey said: “It should be a cause for national shame that, over 19 months after the Grenfell Tower fire, I am having to drag Ministers to the House because there are still buildings in this country cloaked in Grenfell-style cladding and residents who do not know whether their homes are safe.”

Jim Fitzpatrick, LKP patron MP, raised the case of New Providence Wharf in his Poplar and Limehouse constituency, which is owned by Dublin developer Ballymore.

“He [the minister] repeatedly says that there are measures under active consideration to get these owners to comply. When will we actually see what these measures are?”

Robert Neill, Conservative MP for Bromley and Chislehurst, raised the issue of Northpoint in his constituency, where 57 leaseholders face bills of £4 million to remove cladding.

Mr Neill referenced the Tchenguiz Family Trust, the freeholder of Northpoint, declining to pay up to remove the cladding. It receives £7,000 a year in ground rent from the leaseholders, who have a right to manage company in place.

“Assertive measures are urgent for my constituents at Northpoint in Bromley, one of the 42 buildings where the owner—in this case Citistead, an offshoot of the Tchenguiz family trust—refuses to meet its obligations and insists that it will use a term in the lease to pass on the costs to the flat owners regardless. The Government need to introduce a legally foolproof mechanism to override those provisions and prevent my constituents and others from being forced to pick up the tab. Words are not enough.”

Again, Mr Malthouse repeated that leaseholders should not pay.

There were repeated references to “building owners”, meaning the freeholders. In fact, they only own the legally enforceable income streams and are most definitely not the long term custodians of a building.

Clive Betts, Labour MP for Sheffield South East and chair of the Communities Select Committee,  was concerned that the government does not dump the costs on local authorities, but pay for it itself.

He also appeared well aware that government threats to make freeholders pay for this were bogus:

Lucy Powell, Labour MP for Manchester Central, raised the issue of anger in Manchester, where leaseholders in cladding blighted homes cannot sell up or move on with their lives.

She raised the Mirror article about testing at the X1 Eastlands block in Manchester.

Families living in tower covered with cladding which failed tests

Residents in X1 Eastlands block in Manchester were not told for weeks that one panel lasted only 10 minutes before being engulfed in flames during testing The failed test came just two months before the Grenfell disaster, with the bosses that built the tower block accused or covering up the results The construction firm involved, called Forrest, went into administration without showing the buildings owners the information Hundreds of families are living in a tower block covered in Grenfell-style cladding which failed a safety test.

The state of tower block cladding 19 months after the Grenfell Tower fire has been branded a “cause for national shame” after the Mirror revealed a “cover-up”. Ministers were blasted in the House of Commons today after we obtained footage of a panel failing a fire test that was meant to last an hour after 10 minutes.

Hundreds of residents are living at a tower block ­covered in cladding similar to that in the Grenfell disaster. One panel failed a fire test in Dubai which should have lasted at least an hour after just 10 minutes.

Government ministers were warned “Grenfell two is in the post” after the Mirror revealed a tower block in Manchester is ­covered in combustible cladding. Labour ‘s Emma Dent Coad, the local MP to Grenfell Tower, made the warning after the Mirror found the X1 Eastbank block failed a fire-spread test after just 10 minutes.

Dr Matthew Offord, Conservative MP for Hendon, raised the case of Premier House in Edgware, where “my constituents have already paid out thousands of pounds to their freeholder, a small independent developer”.

“Although they are grateful for the Minister’s support, the leaseholders want legal clarity and certainty that they will not be forced to pay any additional moneys.”

“I have previously raised in the Chamber the situation of my constituents in Heysmoor Heights in Liverpool. They live in a high-rise property owned by the offshore company Abacus Land 4. My constituents have already paid for replacement cladding. The situation in relation to insurance cover is completely confused: constituents were told that it was covered, but are now told that it is not. In view of the Minister’s commitment that private owners should not pass on the cost of replacement cladding to leaseholders, will he intervene in the case of Heysmoor Heights?”

Government can’t lend cash to Grenfell cladding sites until someone agrees to pay it back, says LKP