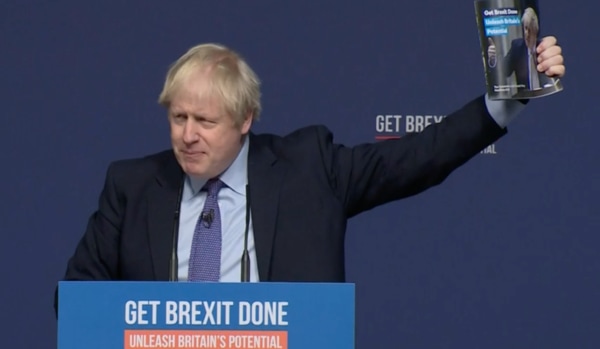 The Conservative party will implement plans to ban the selling of houses as leasehold tenancies and slash new ground rents to zero, it was confirmed today.

The policies feature in the 60-page manifesto entitled “Get Brexit Done, Unleash Britain’s Potential”, launched this afternoon in the marginal seat of Telford.

On page 29 of their manifesto, Boris Johnson’s Conservatives have promised:

“We will continue with our reforms to leasehold including implementing our ban on the sale of new leasehold homes, restricting ground rents to a peppercorn, and providing necessary mechanisms of redress for tenants.”

The move comes following fears that the new party leadership was set to quietly abandon the heavily trailed policies designed to crack down on rip-off leaseholds:

Can the Tories wriggle out of reforming leasehold? Don’t bet on it …

First announced by the then Communities Secretary Sajid Javid, the policy of setting ground rents on new leases to a peppercorn was reannounced in June by successor James Brokenshire, who initially wobbled and suggested a peppercorn was £10 per annum (against legal opinion), which would have allowed developers to continue using the freeholds – to people’s homes – as a tradeable commodity.

LKP believes ground rents of zero financial value, or a peppercorn, will deprive leasehold of a future and clears the way for commonhold to become, well, common.

It is a small but significant victory for campaigners that the Theresa May era policies on leasehold have survived the change of Tory guard.

And expectations were low since it had been briefed to the media that the manifesto would be light on detail, a ‘safety-first’ manifesto written to avoid the fallout seen following the party’s 2017 offering.

The pretence that leaseholders are homeowners has finally been dropped.

Boris Johnson described the document as a “partial blueprint” for the future his party seeks to build.

Council leaseholders, once described as “the lost tribe of Margaret Thatcher, wandering in search of the promised land of Right To Buy”, are finally getting a look in.

Government began reviewing the rights and treatment of leaseholders in the social sector again with its social housing green paper, which was published in the summer of 2018.

It seems this agenda will be pursued by the next Conservative government.

On page 30 of their manifesto, Boris Johnson’s Conservatives say:

“As Boris Johnson has promised, we will bring forward a Social Housing White Paper which will set out further measures to empower tenants and support the continued supply of social homes. This will include measures to provide greater redress, better regulation and improve the quality of social housing.”

A consultation for leaseholders in Wales
Next Post: The Liberals (no, not those ones) register ‘severe dissatisfaction’ with Tory record on leasehold