Donate
You are here: Home / Latest News / Ground rents are so valid … to pay out £300m bonuses to Persimmon cronies 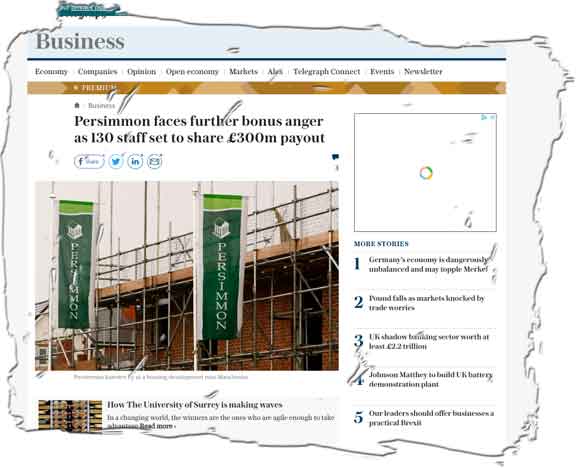 Yet another example of cronyism at work as 130 Persimmon staff share out a £300 million bonus thanks to spreading leasehold houses around the country.

The company’s regional managers are expected to pocket the largest chunk of the payout.

Mr Fairburn declined the full amount after getting up to £75 million, and putting aside some of the remainder for charitable causes.

But this has not satisfied Aberdeen Standard Investments, which “is understood to be exploring whether it can prosecute Mr Fairburn over his reduced £75 million bonus”, according to the Daily Telegraph.

The Telegraph says of the bonus scheme that it is “thought to be the most generous LTIP ever undertaken by a UK corporate”.

Taxpayers will be delighted to know that Jeff’s payola and that of his cronies is funded in large part via the Help To Buy scheme.

The Conservative government fuelled a housebuilding boom, only to find that these lovable little scamps in the housing sector decided to stuff their customers with leasehold tenure and “fleecehold” complex estate management contracts.

Criticism over bumper pay bonuses for Persimmon and Berkeley bosses

No more Help To Buy payola to developers for leasehold houses
Next Post: Right to Manage added to the ever growing list of leasehold reforms