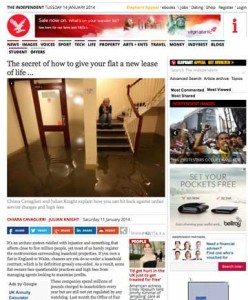 Last Saturday, The Independent wrote a wide-ranging report on leasehold issues and the need for reforms.

Headed ‘The secret of how to give your flat a new lease of life … ‘  it was, in fact, a round-up of: the Cirrus scandal, the OFT investigation into leasehold (the scope of which concludes on January 17), and featured quotes from LKP, Carl and ARMA.

Michelle Banks, the ARMA chief executive, again repeated the nonsense that: anyone can set up as a managing agent so leave it all to ARMA to sort out.

In fact, the abuses of leasehold involve her own members, or those of RICS.

It would be interesting whether Michelle Banks could point to a single major tribunal or court case involving a freeholder employing a non-ARMA or non-RICS managing agent which might support this repeated and self-serving claim.

Michelle Banks steps down at ARMA

Election: Your chance to ask Theresa May about the leasehold scandals