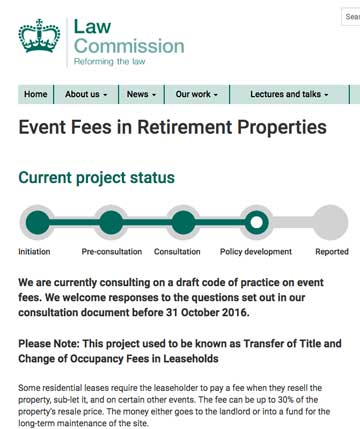 What began as an exercise supposedly to help pensioners and their families facing exit fees in retirement properties has ended up with the Law Commission backing the charges.

He was informed that the Law Commission proposals were “a step backwards”.

Subsequently, AgeUK also informed the Law Commission that “exit fees, unrelated to delivery of a service should be banned”.

The charity echoed the thoughts of LKP in saying: “placing the onus on older residents to legally challenge unfair practice is unrealistic”.

The Law Commission says it was asked in 2014 “to look at event fees in light of public dissatisfaction at how some of these fees were being used”.

Instead, it has bent over backwards to accommodate new and existing upmarket retirement developers for whom high charges on sale are part of their business model.

This is in spite of the fact that there was an outcry over these fees in the mainstream retirement market, and McCarthy and Stone stopped including exit fees in leases from January 2009.

An investigation by the Office of Fair Trading followed which reported in September 2012:

“The OFT considered that the transfer fee terms were likely to be in breach of the Unfair Terms in Consumer Contracts Regulations 1999 (the UTCCRs).”

The Law Commission is uninterested in these historic fees, which may apply in as many as 150,000 leases.

The exit fees on sale and subletting were one of several monetising practices that explain the origins of Campaign against Residential Leasehold Exploitation.

The others were: predatory management; shadowy offshore freeholders; the systematic cheating of pensioners in the Peverel / Cirrus collusive tendering racket ruled on by OFT; loaded commissioners for contractors, such as insurers; dismal resale values of retirement properties (where 40% falls on new prices are frequent).

Instead of bothering with any of this, the Law Commission decided to concern itself with the business models of new entrants to the retirement housing sector, and some upmarket existing ones, which charge high exit fees on sale.

Provided they are transparent they are fine, the Law Commission has decided.

It bewilders Campaign against Residential Leasehold Exploitation why the Law Commission is seeking to facilitate these business models in the UK – which combined with the monetising possibilities of English leasehold law may or may not prove problematic ¬– instead of addressing the issue already outlined by the OFT.

LKP welcomes new entrants into this market, and new thinking from abroad.

But what appears to work well in a highly regulated Australasian context – where 17% of over-65s live in retirement accommodation, may not work so well here, regulated by our flawed landlord and tenant law. (We are less enthusiastic that this developer is building with 125 year leases, which means it is keeping the whiphand over the leasehold owners.)

In the UK, only 2% of over-65s live in designated retirement developments. Under the circumstances, that is not surprising.

Most oldies downsize to ordinary smaller properties, which track resales in the local property market and come with far fewer problems.

We have reminded the Law Commission that its inquiry into exit and subletting fees came about following two OFT investigations into a dysfunctional retirement housing market.

Campaign against Residential Leasehold Exploitation activists made a huge effort to provide the evidence to begin the OFT exit fee inquiry, which was strongly opposed by the sector at the time.

It resulted in a leniency deal with Peverel, which was co-operating with the investigation – or owning up, as it might otherwise be termed – a derisory “goodwill” payment to the sites affected and fines for stooge contractors, who went into administration and paid nothing.

The Campaign against Residential Leasehold Exploitation whistleblowers, meanwhile, were threatened with prosecution by the OFT if they compromised this feeble and tokenistic inquiry by going to the press. They were the only ones facing criminal sanction in the entire vapid process.

Against this background, the Law Commission began its leisurely study. Somehow or other, it has ended up deciding that easier exit fees for those retirement housebuilders who say they would rather like them is the way forward.

Provided these fees are “transparent”, of course. “Transparency” – surely an exhausted word in leasehold? – appears to translate in practice as: provided an estate agent makes reference to them on the advertising somewhere.

The Law Commission seems unaware of dissatisfactions in the upmarket retirement sector.

There is the obvious point that high exit fees mean pensioners cannot sell up and leave if the move has not worked out.

We reported these issues of residents in a Retirement Villages site here:

The Campaign against Residential Leasehold Exploitation has been consulted on many occasions by residents at upmarket sites, or by their concerned families, although the Law Commissioner seems to believe we are only occupied with the “one-per-centers” of the mass market, to use its patronising term.

We have urged families to contact the Law Commission with their evidence, and some have done so.

One example involves a family whose elderly relative lived in a £310,000 retirement flat at Bramshott Village, run by Urban Renaissance Villages.

Only 18 months after purchase the relative died. Exit fees kicked in: within three years they were five per cent; then 10 per cent for another three years; thereafter 15 per cent.

In fact, some adjustment was made to the exit fee, although subject to a non-disclosure agreement (NDAs).

In other retirement villages, new leases are issued on resale.

This means that the substantial monetary losses of families reselling a retirement property back to the freeholder is not evidenced on the Land Registry.

The upper middle classes might not be making as much noise as the “one-per-centers”, but that does not mean they are unaffected by some of the practices in this flawed sector.

Philip Rainey QC: Reform of the law is a duty (and for landlord and tenant law it is overdue)
Next Post: Pete Redfern: Stop pontificating about the housing crisis and sort out the ground rent scandal of Taylor Wimpey’s own making